Facebook Twitter LinkedIn Tumblr Pinterest Reddit VKontakte Odnoklassniki Pocket
What started like a joke on Friday, when petroleum marketers in Anambra State refused to open their stations to sell products to motorists has marred the celebration of the Independence Day in the state as the protest entered its second day. 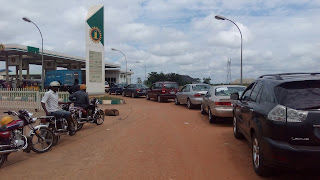 WWW.ELEKENEWS.COM reports that as early as 4am

yesterday, some motorists scampered from one petrol station to the other, looking for where to buy products to power their vehicle for the day’s activities.

The search was as a result of information the previous night that some stations were going to open very early to dispense their products to customers and close before 6.30 am to avoid paying a fine of N500,000, which IPMAN, Anambra chapter had imposed for anyone who sold products.
The protest it was gathered followed the activities of some revenue officers of Anambra State, which caused a taker which was laden with petroleum product to fall into a ditch in Ihiala Local government of the state, recently.
Others said the fate of the tanker was caused by the activities of  Civil defence officials, who regularly extort money from tanker drivers.
The IPMAN after a brief meeting had WWW.ELEKENEWS.COM learnt resolved that all petroleum station in the state will shut in protest, while the state governor, Chief Willie Obiano was mandated by the group to bear the full cost of the wasted product.
The abrupt closure  had caused confusion on Friday as most passengers were stranded at the various bus-stops in the state.
Commercial vehicle drivers cashed in on the situation to hike their fares.
The transport from Awka to Onitsha which used to be N200 per trip was increased to N300; Awka to Enugu was hiked to N500 from N300 and from Onitsha to Enugu N700 as against N500.
The situation continued on Saturday, forcing most vehicle owners to leave their vehicles in the house, while some were frustrated as their vehicles packed up by the roadside after they exhausted their stock.
As at yesterday, only the NNPC mega station, Awka and other NNPC sub-stations in the state were seen selling petroleum products in the entire state, with very long queues.
Some of commuters who spoke to THISDAY lamented the hardship, saying that their activities and plan for the Independence day have been disrupted.
A motorist, Mr Jude Aguogu told our correspondent that his frustration further grew when he took a jerrican to NNPC station and was told they would not dispense into it, as his car was parked by the roadside after he exhausted his fuel.
He lamented that all his plans has blown up in his face as he intended to utilise the opportunity of the long holiday to take his family home.
As at the time of filling this story, government officials were said to be  holding meeting with the leadership of the marketers in Awka, and none of the parties have reacted on the matter publicly as at the time of this report.
Attempt to reach the spokesperson of NSCDC, Mrs Rajunor Egbe for their side of the story failed as her phone line was not teachable.
WWW.ELEKENEWS.COM
that the protest  continue to tomorrow, while some motorists are said to be visiting neighbouring states of Imo, Delta and Enugu states to fill their vehicle tanks with petroleum product.
Meanwhile, the Amalgamated Consumer Coalition Enforcement Association (ACCEA) an Onitsha based NGO and consumer interest promoters league has condemned the Independent Petroleum Marketers Association of Nigeria (IPMAN) and Petroleum Distributors Association of Nigeria (PEDAN) for bringing untold hardship to innocent consumers in Anambra.
The group said by embarking on sudden strike action to stop the sale of petroleum products it has thereby worsened the effect of the economic recession.
The condemnation was contained in a statement by the President of the Association, Prince Ikpedi Obumneme,‎who described the action of the petroleum marketers as “unprovoked, reckless and a blackmail on the consumers who are paying for the sins of exploitative unions who do not care about others,” he said.