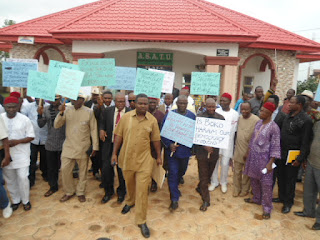 PIC:Presidents General of the 177 communities in Anambra State in a protest march over the relocation of 47 Boko Haram prisoners to Ekwulobia prison, yesterday.

PRESIDENTS GENERAL of all the 177 communities in Anambra State have called on the federal government led by President Muhammadu Buhari to relocate the 47 Boko Haram Prisoners, recently brought into Aguata Prison, Ekwulobia out of the state as investors and have started fleeing the state because of them.
The Presidents general who briefed journalists yesterday in their office under the aegis of Anambra State Association of Town Unions, ASATU said the federal government has no reason at all to move the terror suspects to Anambra State or anywhere in the south East.
There stated that since the said relocation, investors have started relocating out of the area, just as fear have crept into the entire Ekwulobia, leaving markets in the areain near  empty state as people now fear to go into public places like markets.
The group speaking through its National President, Dr Jude Okolo said it received with shock, embarrassment and disdain the news of the relocation of the prisoners through the Nigerian Prisons Service.
It stated that the people of the southern part of Nigeria, particularly the South East were the first target of the deadly group, killing, maiming and displacing the people and also destroying their places of worship, businesses and places of social gathering.
They said the relocation was not well thought out, ill conceived, ill considered, grossly insensitive, condemnable and therefore totally unacceptable to them. He said if it is not, why will the insurgents be relocated to a place that was not within the jurisdiction of their activities as they were still awaiting trial.
“The Ekwulobia prison is a minimum prison located in the middle of a densely populated community which is surrounded by tertiary institutions and therefore grossly inadequate for such inmates of high security risk.
“There is no military presence in the case of recurrent emergency of prisons breaks associated with the Boko Haram insurgents. This is in flagrant disregard of prison convention and best practices worldwide. The courts in Anambra State has no jurisdiction to try them for offence committed in other states, so why are they bringing them here?” They asked.
It further stated that the continued presence of the prisoners is a trauma too many for Ndigbo who have not fully recovered from the physical and psychological trauma of the past and recent pasts occasioned by gross maltreatment from some fellow Nigerians in different part of the country.
The group which also went on a protest carried placards, which had inscriptions that protested the relocation of the prisoners. Some of the placards read; Enough is enough, we demand the relocation of Boko Haram prisoners from our state, Is this the dividend of democracy? Among others.