Facebook Twitter LinkedIn Tumblr Pinterest Reddit VKontakte Odnoklassniki Pocket
Governor Willie Obiano of Anambra State today displayed rare humility and capacity to look beyond private injuries for the greater good of the state when he boldly sued for peace in the raging war between him and his predecessor and brother, former governor Peter Obi.

Delivering a rousing eulogy at the funeral mass of the former Principal of Christ The King College Onitsha, Rev Fr N. C Tagbo, ‎Governor Obiano took the congregation by surprise when he turned and intoned, “May I use this opportunity to ask the former governor of Anambra State,my friend and brother, Chief Peter Obi, that whatever I may have done to him, he should forgive.”
Speaking further, Governor Obiano who noted that the late Father Tagbo had taught them to love and pursue unity with one another, said it was only proper for him to apologise, although he did not know what the actual cause of the rift between him and his predecessor.
Demonstrating the spirit of sportsmanship Governor Obiano further lauded his predecessor and reminded the audience that  his campaign promise was anchored on continuity assuring that he  was giving his best in the service of the State as he was taught by the late father Tagbo.
Paying glowing tributes to the late Principal who helped mould notable Nigerians as principal of the renowned CKC, Governor Obiano described Fr. Tagbo as “one of the greatest shepherds of our time!”
According to him, the former principal’s death was a personal loss because he was the last of his many sons to become a governor while he lived.
“Of course before me, there was his Excellency former governor Peter Odili and my brother, former governor Peter Obi. But I was the one he saw last before Fr. Tagbo moved on to the ages. How I wish Fr. Tagbo had lived longer to see what his many other sons would become tomorrow,” he reasoned.
Speaking further, Governor Obiano ‎said,
“I don’t know if my experience approximates the experience of others but I must confess that the values Father Tagbo gave to us in our formative years have refused to be eroded by time. I have not surrendered those values and I will never surrender them.”
On the impact the late Principal had on the community, Obiano declared that ” If truly we measure a man by the impact he has had on his environment, Fr. N.C Tagbo stands taller than almost all his contemporaries. He never condoned any unruly behaviour and never failed to put in a word of encouragement or to make us realise that we can be better than our best.”
Concluding his eulogy, Governor Obiano reasoned that ‎in truth, “Fr. Tagbo did not die. He merely assumed a more dignified position in our lives because he now lives in us.”
Responding to Obiano’s olive branch, former governor, Obi who pointed out that what was at stake was beyond him and his successor, said as a Christian,  he was under obligation to forgive whenever there was cause to.
He pledged his total support to the Obiano administration in its efforts to build a better Anambra for the younger generation whom he noted that the leaders of today must give account of their stewardship to.
In his own remarks the Catholic Archbishop of the Onitsha Ecclesiastical Province, Most Reverend Okeke who observed that even in death Fr Tagbo had remained a bridge builder, thanked the duo for putting aside their differences and uniting to work for the growth of the state, describing them as true Christians.
Other Old Boys who spoke at the event, including Prof Pat Utomi, Dr Peter Emetulam and Dr Mike Ejiofor took turns to eulogise the late Father Tagbo as a master moulder of men. 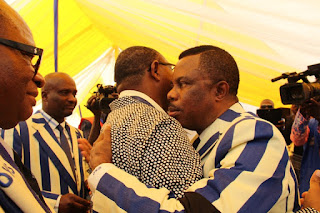 "Why Anambra Atorny General, Anali Chude should be commited to prison"

WHAT NNAMDI KANU'S WIFE SAID ABOUT HER HUSBAND