The quest for the Governor of Anambra state Chief Willie Obiano to be reelected to office come 2017 gubernatorial elections in the state has disunited the youths of the state.

The youths under the aegis of ASATU-youth wing were in the process of conducting their general election on Friday 27th may 2016 at government house,  Awka when all hell was let lose as some section of the youths perceived to be loyal to the governor felt that the candidate who will possibly win the election will act against the governors interest.

This made the Governor’s representative and also an observer to the election, Mr Chinedu Obidigwe (SSA Political) “to single handedly declared the election inconclusive”. As reported by one of the youths present at the election venue.

Another youth  who witnessed the ” inconclusive election” Mr Ernest Uba, using is FACEBOOK, expressed dissatisfaction over the action of the governor’s representative and his team and  prayed for a proper, free and fair election to be conducted, failure which could degenerate to a severe tumult among the youths.

He alleged that Mr Chinedu had earlier imposed the leadership of the youth on them and  explained that plan to repeat such injustice will result to a grieve crisis among the youths which could eventually compromise the governors second term bid.

His words ” Ab initio, Obidigwe imposed on the association someone without  allowing election to take place. In as much as I support Obiano and as well a strong APGA member I detest abuse of power. And it will surely affect our effort to make sure Obiano is re elected.”

On his part, another youth, Mr Valentine Ulasi, who used his social media account to express his aversion over the conduct of the election evinced worries over the members that constituted the electoral committee, asking.

“How can Nchekwube Anthony (Dunga) who is a serving State Auditor of APGA be the Chairman of the electoral Committee and you people expect a free and fair election? Whose interest do you think he is out to serve? APGA nay Gov Obiano’s interest or ASATU’s interest? Time to think!”

As at the time of filing this report, efforts to reach Mr Obidigwe on his mobile line proved abortive as he was not responding to his calls. 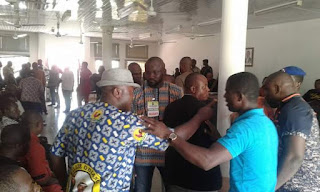