A source who is also a core party man told THE RAZOR NEWS that billions of Naira was spent on buying votes by the aspirants, to the point that it became an ego thing, over who will pay more.
The source said each of the 16 aspirants spent between N500, 000 and N2million on each of the 218 delegates, just to get their votes.
“What happened on 26th June is something that no single person can conclusively tell the story, but I will tell you the little that I know. I was one of the delegates, and the best thing PDP did for some of us was the decision to use super delegates for the election. 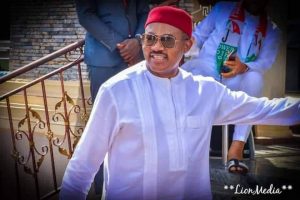 “Some delegates got as much as N10million from that single event that happened at Prof Akunyili Women’s Development Centre on 26th June. More than three lists were sent in on that day, and each of the list had people there were designed to favour, but in all, the lists that were brought in either favoured Ekwunife, Ozigbo or Obiora Okonkwo.
“People like Maduka were not in the game, they were only waiting for the final list to be announced, so that they will sway the minds of the people with money. He (Maduka) had so much confidence in his money that he believed that whichever list that was later used, he would buy them over.
“Meanwhile, the Edo deputy governor that came for the election was very mindful of stepping on anybody’s toes, so what he did was to try to harmonize the three lists sent down by the headquarters of PDP. That was what took most of the time that day. When it was now certain which of the lists was going to be used, the aspirants started giving out money to people. 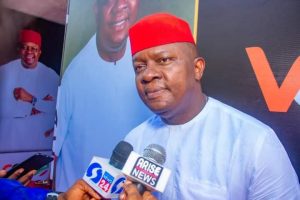 “Maduka gave dollars, which was equivalence of N1.5million. his problem was that he thought he was giving so much that he didn’t even care to check what others were giving. He didn’t know Obiora Okonkwo was giving N2million each to all the people he had chosen to vote for him. Obiora was underrated by all. He had more money to spend and even bought governorship forms for most of his fellow aspirants. Does it not surprise you that even with all the argument about zoning, he got the most votes, despite coming from the central zone.
“As for Azubogu, I think he had a problem that day or he was merely trying to play a fast one of the delegates. He was always on the phone talking, and assuring everyone that a bullion van was on the way from Onitsha, but until the end of the Congress, no one saw any money.
“Many people believed him, because he was greatly worried and was making efforts to pull his money in. I think the delegates didn’t trust his story, and that was the reason for the low vote he got.”
Another source said the reason for Ozigbo’s victory was not just because he gave out money, but because he had a powerful party leader in the state who did a lot of work on his behalf.
“The party leader was at Uzu Awka’s farm, close to Wonderland. That was where he dished out money to delegates, and made lots of phone call that changed the game.”
One of the respondents who spoke to the RAZOR NEWS said, “Most if these things were done codedly. Most people collected money, and some camps didn’t know, still thinking that they were still being supported by such people.
“I sat with a friend who told me that he was coming. I observed he just got a text message and he left immediately. When he came back later, he was full of smiles. People only spoke to delegates they we’re sure they can convince. That was why most journalists who stood in the election centre had eyes but could see anything.
“Ekwunife was another grassroots politician who would have carried the day. Long before the primary election, she had given some key supporters about N750,000 each for their businesses, with a caveat to ensure that they vote for her. There was another grade of people she had also given N300,000 each. As for that election day, I didn’t know how much she shared, but she got lots of votes still.”
THE RAZOR NEWS gathered that some old politicians who have all lost fate in politics were revived because of the use of the super delegates list in Anambra State. It was gathered that some who have been sick for sometime and even confined to wheel chairs have immediately commenced housing projects, while others have bought cars and started living life afresh.
The primary election had been won by Valentine Ozigbo with 62 votes, with Obiora Okonkwo coming second with 58 votes. Ekwunife polled 44 votes while Azubogu, Maduka and other top contenders scored less than 10 votes.