Anambra State governor, Prof. Chukwuma Soludo has ordered all public servants in the state to always report to work on Mondays, like other weekdays. 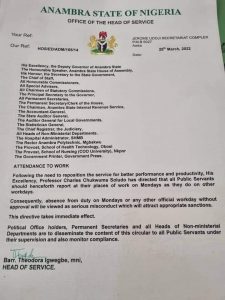 Since the resumption of trial of the leader of the Indigenous People of Biafra, IPOB, Mr Nnamdi Kanu, the group had earlier called for a shutdown of businesses on Mondays, but later rescinded it.

Despite the rescinding of the decision by the separatist group, there have been fear of attacks on those who go to work, leading to continued stay at home every Monday.

In some parts of the state, Saturdays have been adopted as working days, including schools and banks as a replacement for Monday.

But in a move to return Monday to normal working days, Prof. Soludo on Monday through the Head of Service, Barr. Theodora Igwegbe ordered workers to always ensure they are at their duty posts on Mondays.

In a circular dated today 25th March 2022, which was signed by the Head of Service, Barr. Theodora Igwegbe and sighted by THE RAZOR NEWS, Soludo warned that absence from work on Mondays will attract sanctions.

Part of the memo read: “Following the need to reposition the service for better performance and productivity, His Excellency, the governor of Anambra State, Prof. Chukwuma Soludo has directed that henceforth, all public servants should report at their places of work every Monday as every other weekdays.

“Consequently, absence from work on Monday, or any other workday without any approval will be viewed as serious misconduct, which will attract appropriate sanctions. This directive takes immediate effect,” the memo read.

Soludo had last year lamented the continued boycott of work on Mondays in the South East, saying that the zone loses an estimated N19.6billion every Monday.

During his inaugural speech as governor, last two weeks, Soludo had extended an olive branch to all armed groups, saying he was ready to engage them in a round table discussion. He lamented that many criminals now hide under freedom fighting to perpetuate criminality.

Akaekpuchionwa to Declare for Ogbaru House of Reps Position on Saturday 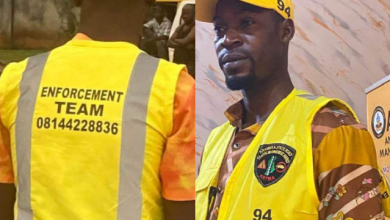