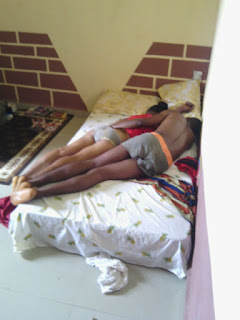 The love birds, lying stiff on their bed after an all night romp 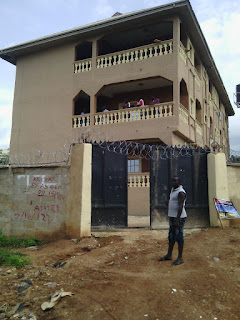 The hostel where the student lived
Two students, a male and female of Chukwuemeka Odumegwu Ojukwu University, COOU, Igbariam, Anambra State, have reportedly died in a hostel room located near the school.
The students according to their counterparts who spoke to journalists said the girl who is from Imo state and a student of the institution visited his male friend who is also a student, and had gone to bed on Saturday but never awoke the next day.
One of the sources who spoke to our reporter said that they awoke on Sunday morning and there was no sign of the student, who is said to be a 300level student of public administration.
It was gathered that the students had both died after sex romp together unknown to their neighbors who never knew of their fate until their bodies started decomposing.
The bodies were said to have been found on Tuesday by another student who lives in the hostel and had promptly raised alarm, leading to the police being invited.
Although the actual cause of their death has not been ascertained, reports have it that the boy had drugged the girl to gain access to her, and after his act on her through the night found out that he had passed out. He was said to have quickly taken a poisonous substance upon his discovery to avert arrest.
A student of the institution who preferred anonymity told our reporter that men of the Special Anti Robbery Squad(SARS) from Awkuzu arrived on time to remove both bodies, which were said to have been deposited in an undisclosed morgue.
Meanwhile, the public relations of officer of the university, Mr EC Nnubia in a telephone interview with journalists insisted that there was no such incident in the university, saying that such were fabricated reports meant at tarnishing the good name of the institution.
The Police Public Relation Officer(PPRO), DSP Uche Ezeh while reacting to incident to our reporter on telephone also said that he was not aware of the incident, but in an earlier interview with other reporters he had owned up.

Onitsha petrol tanker disaster: One accident too many

APGA leaders at war over choice of National Chairman