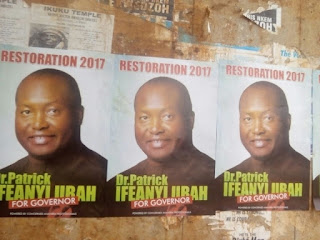 Billionaire business man and Chief Executive Officer of Capital Oil and Gas, Dr. Ifeanyi Ubah has flooded the capital city of Awka with posters of his governorship ambition in 2017.

The posters which were seen in strategic places in Awka bore the inscription; Restoration 2017, Ifeanyi Ubah for Governor Anambra State, however did not state the party he was intending to actualise his ambition.
Meanwhile, Dr Ubah has distanced self from the campaign posters saying they did not emanate from him or his office.
The disclaimer which was issued by Ubah’s media aide, Ikechukwu Onyia reads, “My attention has been drawn to posters tagged “Restoration 2017” with my picture and the inscription “Dr Patrick Ifeanyi Ubah for Governor 2017” powered by Concerned Anambra Professionals.
“Let it be well noted that persons doing this do not have the consent of Dr Patrick Ifeanyi Ubah and Ubah has distanced himself from such posters even as he urges the general public to discountenance everything connected thereof.”
He said Ubah is focusing on finding answers to the disheartening youth unemployment crisis bedeviling the society and which has eaten deep into the fabrics of the system.
Onyia said Ubah plans to curb this through his numerous
employment platforms and windows for now and would not be distracted by the politics of 2017 Anambra
Governorship election, and the posters.
Onyia added that while democracy allows for people to take positions on political matters, he frowns at using his name and pictures for politics without his approval as that could be called suspicious behaviour on the part of those behind it.
He also noted that pasting of 2017 Governorship election posters now by anybody, amounts to distraction to Gov Obiano and capable of overheating the polity.