The Anambra State Governor,Prof Chukwuma Soludo, has given hope of the All Progressives Grand Alliance(APGA) producing the next governor of Abia State in 2023.

Soludo stated this,weekend, at the Governor’s Lodge, Amawbia, in Awka South Local Government Area of the state when the APGA governorship candidate in Abia State for the 2023 poll, Prof Gregory Ibe, paid him a visit.

In a statement on his Facebook page ,Soludo promised to personally lead the charge of APGA winning the 2023 governorship poll in Abia State.

Stating that his discussion with the Abia governorship candidate was worthwhile, Soludo hailed the virtues of Prof Ibe, describing him as a great achiever.

He said,” Earlier today, I received a delegation of the Executives of our great Party — the All Progressives Grand Alliance (APGA) — from Abia State at the Anambra State Governor’s lodge, Amawbia.

“The leader of the delegation and candidate of our party in the upcoming 2023 gubernatorial election, Prof. Gregory Ibeh, came bearing good tidings from “God’s own State”‘.

“Prof. Greg’s personal contributions to the development of Society is deserving of commendation. I am certain Abia desperately needs a Greg Ibeh.

“We shall be in Abia to lead the charge when the time comes,” Soludo stated.
.

Democracy Day: Abiola's, others' sacrifices not to be taken for granted -Soludo 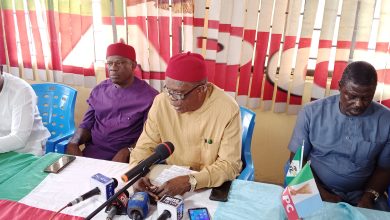