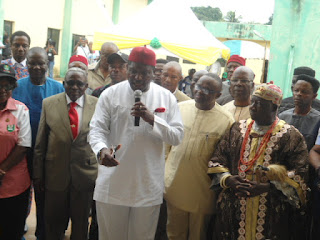 PIC: PG OF ABAGANA, BARR ILONZE FLANKED BY THE MONARCH OF THE COMMUNITY AND THE DVC OF NOUN, DURING THE COMMISSIONING AND HANDING OVER OF AN EDIFICE BUILT BY ABAGANA COMMUNITY AND DONATED TO NOUN.
The Vice Chancellor of the National Open University of Nigeria, NOUN, Prof Vincent Tenebe has stated that the greatest challenge facing the institution is the availability of accommodation.
Tenebe said that every where the institution had a study centre, there is limited space and unavailability of structures, even as the university is currently attracting high demand, with its population increasing every day.
Speaking during a ceremony to mark the official handing over of an edifice constructed by the Abagana community, which is playing host to the university’s study centre in Anambra, Tenebe who was represented by the Deputy Vice Chancellor, Prof Patrick Eya urged other host communities to emulate Abagana.
He said the institution spends a lot during examinations to as it has to hire halls from other schools for its students to sit for exams. He expressed happiness that the people of Abagana came to their aid by constructing a one storey building and also equipped it for their use.
Also speaking, the President General of Abagana Welfare Union, Barr Ephraim Ilonze said the idea of constructing, equipping and donating the building to the institution came when the coordinator of the centre, Prof Mrs Nnaka approached him with a five bedroom plan.
He said that rather than follow the plan which was estimated to cost between N6million to N7million he opted to build a storey building to give the institution a larger space to operate.
“In Abagana, we have great love for education, and since some of our children are here, we decided to help them in any small way that we can by constructing the building, equipping and donating it to them.
Clems Ofoegbu, the representative of the commissioner for education in Anambra State, Prof Kate Omenugha assured that the state is fully committed in the support of the educational sector, and will continue to help the university anytime his assistance is sought.
He said such was the reason for the donation of a brand new Hiace bus recently to the institution by the state governor. He assured that the governor will not relent until the educational sector in the state achieved excellence.
Our correspondent’s independent enquiries revealed that the building cost the Abagana Welfare Union about N14million, besides the equipments installed in it, which included chairs and tables, computers among others.

'We’ll forge alliance among all factions of Anambra PDP’