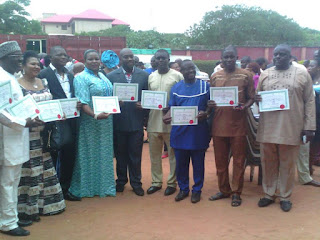 Incoming lawmakers during their collection of certificates of return from INEC

Anambra State assembly will today inaugurate the new members of the assembly, in this piece, DAVID-CHYDDY ELEKE writes on how the new assembly will vote to choose a speaker and how the interest of the state governor will sway their choice.
Already, there exist an unwritten pact on power sharing in Anambra State, and with the governor, Chief Willie Obiano coming from Anambra North, and his deputy, Dr Nkem Okeke from Anambra Central, members of the assembly which will be inaururated today from the two zones have already been disqualified from seeking for the position.
On the other hand, only returning members who are known to have cognate experience in lawmaking are the ones that will be nominated for the position, and that has further narrowed the race to just a few individuals.
Hon Rita Maduabum representing Nnewi South, Hon Ikem Uzoezie, Hon Kingsley Iruba and Hon Nikky Ugochukwu are the four members from the Southern senatorial zone of the state who are also returning members and who have been slugging it out in secret power game over who gets the support of other members of the house to become the speaker.
Beyond the support or choice of the members of the house from other zones, there are also vested interest who have been working hard to ensure that only a candidate loyal to their interest would emerge the speaker. The candidates are seeking the support of the All Progressives Grand Alliance, APGA which solely constitutes the house, The immediate past national chairm,an of the party, Chief Victor Umeh who still remains a force to reckon with in the state and the governor of the state, Chief Obiano who sweated it out to ensure full delivery of the 30-man house to his party except for two members from PDP.
Hon Princess Nikky Ugochukwu who will be the oldest serving member of the house by the time the house is inaugurated was initially favoured to the ‘man’ for the job, even though there were expressions of sentiment about she, a woman, succeeding the out-going speaker, Hon Princess Chinwe Nwaebili who was also a woman. This may have led to her being dumped by various interest groups.
Hon Ikem Uzoezie was also highly favoured as he comes from the same zone. Ikem is a young politician, vibrant and also experienced in the art of lawmaking. He will be a second timer in the house. Ikem is favoured more because his emergence will mean a shift from the female folks to the male, and for a youngman, this will help to shape his career and also give the youths a sense of belonging.
This however did not fly when many variables were brought to bear. Governor Obiano wants a loyal speaker, and even though there are no signs that Ikem may betray the governor or the party, his mother who was a commissioner for women’s affair under Governor Peter Obi was a minus for him. His mother, Ego Uzoezie is said to be a die hard follower of Obi, even though he also holds the former APGA national chairman in high esteem. With all these, the Governor is said to be confused about where he features in the heart of the Uzoezies, and will rather go for another.
Hon Barr Rita Mmaduabum is the next in line for choice. A second timer like Uzoezie and Iruba, Rita was a lagos based lawyer before she enlisted into politics, and seen as a good choice of a speaker considering her background as a lawyer, but some analyst it is said have argued that she would be too independent minded to listen to the party or executive arm of government, and giving the speakership to her may be a mistake, considering that she was of PDP stock before moving to the APGA immediately after winning election for her first term.
They argue that the ease with which she dumped PDP may be the same ease she would be ready to move back if need be, especially now that some PDP stalwarts are bent of getting at Obiano, and giving the speakership to anyone whose loyalty is not total may be detrimental to the governor in the future.
It was however gathered that Kingsley Iruba may, an equally young politician from Aguata 2 state constituency may have been penciled down for the speakership. Though it is argued that he is a young politician, but sources said he is just the perfect kind that would diligently obey orders.
During a valedictory sitting last Tuesday, the outgoing speaker, Nwaebili eulogized Governor Willie Obiano, saying that the house has enjoyed the support of the state government like none before it. This eulogy analysts say is just the kind that every state governor would want, and that having a submissive and level headed speaker would be the best for the state government.
Despite all, APGA has remained a party full of surprises. From the primary elections of the party in 2013, which was superintended by then Governor Peter Obi, and which had several names that had been penciled down for the ticket, including Hon Uche Ekwunife, Idigo, Obidigbo among others, but which on the D day turned out a surprise with Obiano winning with a large margin, to the emergence of Dr Ike Oye just last week as the national party chairman despite permutations that known names would have emerged are just some of the reasons political analysts in the state believe that the speakership election may go another way today.

HOW KIDNAPPER HYPNOTIZED AND KIDNAPPED A SCHOOL GIRL