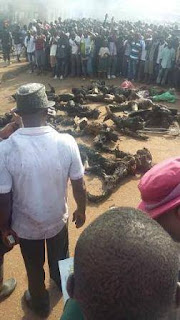 The management of Toronto Hospital, the hospital where scores of charred bodies of victims of last two weeks tanker fire disaster in Upper Iweka, Onitsha were taken has said that several charred bodies have remained unclaimed in their facility, weeks after the incidents.
The Chief Medical Director of the Hospital, Dr Emeka Eze during a visit to his hospital by the leader of Progressive Peoples Alliance(PPA) in Anambra State, Chief Godwin Ezeemo said the bodoes have remained unclaimed because because they were burnt beyond recognition.
Dr Eze also revealed that the stampede that occurred during the May 31, tanker accident in Onitsha, Anambra, was the cause of the rise in death toll, while also cautioning thet people should take time before blindly rushing to accidents scenes, except trained personel like the Red Cross and others.It would be recalled that no fewer than 69 persons lost their lives; while 50 other sustained various degrees of injuries all of which were deposited in the hospital, with the state and federal government promising to pick the bills incurred.Eze revealed this on Thursday when the Publisher of Orient Daily and Magazine, Mr Godwin Ezeemo, paid a sympathy visit to the recovering victims at Toronto Hospital, Onitsha, Anambra.Speaking on the inability of relatives to identify and collect corpses of their loved ones, Eze said that Consequent upon this, the Anambra government has sent pathologists who came and took samples of the dead.Eze commended both the Federal and Anambra Governments for their prompt intervention when the incident occurred. “This shows that the present leaders have the interest of their people at heart,” he said.According to him, the hospital isolated the victims, which has helped the recovering victims to survive. “They would have died if not that we isolated them. We heat up the rooms where they are kept because they have no skin in them and feel cold,” he said.Responding, Ezeemo, who was accompanied by his wife, Nneka, said he felt bad when he heard of the incident and resolved to come and see some of the survivors.He called on the government to look for an alternative location to avoid motor parks being located along major roads.

Anambra Assembly and the search for a loyal Speaker