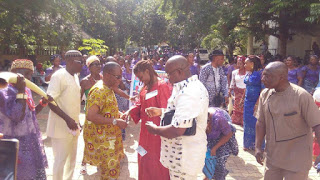 It was a cultural fiesta in the cottage home of Mr Godwin Chukwunaenye Ezeemo today as more than 400 women from Obosi named Ezinwanne Cultural Dance came to endorse him and display a colourful cultural dance in his honour.

Mrs Uju Mozie who lead the women to Ezeemo’s residence told newsmen that her group is the women wing of Prince Mike Nwakobi campaign organisation and had set up the dance as a revenue generating avenue with which they empower themselves and help indigent members of their society.

Mrs Mozie said that their choice of Godwin Ezeemo as their candidate for governor was informed by Godwin Ezeemo’s widely acclaimed humanitarianism and impeccable character which gives them confidence that if he assumes the seat of governance, the grassroots would feel his impact immensely.

She observed that Anambra mothers and youths are suffering in the present administration and prayed that God perfects His plans of installing Ezeemo as the next governor of Anambra State so that their condition will improve.

“We know that if he governs Anambra State, a great transformation will be experienced,” she said.

Amechi Muonagor, the Nollywood sensation and Chief Matthias Ameke, the Anambra State chairman of Progressive People’s Alliance, and members of Ohaneze Youth Wing were among the scores of dignitaries that graced the event.

Muonagor was full of praise for Ezeemo, saying that his kind is direly needed at the government house given his indisputable love for humanity especially Ndigbo.

Ameke also described Ezeemo as one to reckon with and in fact “the only viable candidate for governorship in the forthcoming Anambra State gubernatorial election.”

A drama played out at the climax of the event when a motion was moved for the endorsement of Ezeemo as the only credible candidate for governor come November 18, 2017, and the Obosi women as well as all who were present gave their nod and sang victory songs in honour of Ezeemo.

Andy Uba orders all PDP campaign vehicles donated by him, returned to APC

Innoson Gives Out Car, Salary For Life To The Man Who Prophesied About His Vehicle Manufacturing In 1979.