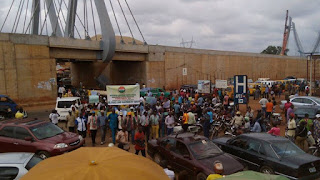 Anambra state chapter of the Nigeria Labour Congress, NLC has inaugurated a monitoring team to ensure strict compliance to the strike action declared by the union as a result of the sudden increase in the price of fuel.

The chapter chairman of the union, Comrade Jerry Nnubia disclosed this after a protest march to various offices in Awka, saying that the team will be charged with the responsibility of visiting offices around the state to monitor and detect defaulter.
According to Nnubia, the strike is however not targeted at the state government, as the Governor, Chief Willie Obiano has been meeting the expectation of the workers through prompt and timely payment.
“We are not protesting against our governor, he has been doing well in the state, and also paying us promptly, even with the down turn in the economy.
” What we are protesting is the hardship imposed on us by the present government through increments. The same government that rejected a court order and went ahead to increase electricity tariff has again increased the price of fuel. We are here to say no to that.
“When we voted this government, we looked forward change and not hardship, but today what we are seeing is hardship. It is even worse for workers who have fixed salary, as the price of foodstuff in the market has increased.” Nnubia said.
He urged members to always comply with the strike until the leadership of the union speaks to the contrary. He urged them to ensure full compliance and shun rumour mongers.
The protesting workers were at the Anambra secretariat where they picketed workers and stopped them from carrying out their duties. They were also at the premises of the state own radio station, Anambra State Broadcasting Service, ABS

Innoson denies commencement of prosecution against him for forgery