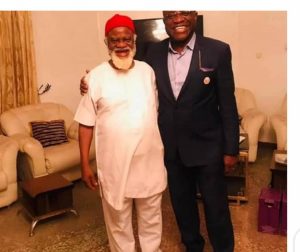 Determined to emerge as the next governor of Anambra State after the Saturday, November 6, 2021 guber election, Action Alliance (AA) flagbearer, Chief Ben Etiaba, has paid a courtesy visit to the former Anambra governors , Dr. Chukwuemeka Ezeife and Senator Chris Ngige to consult with him on his political aspiration.

Etiaba had contested on the platform of All Progressives Congress (APC), for the ticket of the party, where Ngige is the state leader.

Ngige had also publicly disowned Andy Uba as the candidate of the party, insisting that the primary election that threw him up was manipulated.

Many political analyst in the state have predicted that Ngige may work against Uba in the general election, but this insinuations have not been verified by THERAZORNEWS.

During the visit, Etiaba said he held a very useful discussion with the two ex-governors on issues regarding his decision to govern the Anambra State.

According to Etiaba, he equally held talks with the ex-governors on the problems currently facing Anambra State, and the way forward for the state and her People.

The Action Alliance (AA) party governorship candidate however told his hosts that Anambra was in great need of a selfless and dedicated leader who would pull the state from the brink and launch it on the path of strategic development and progress.

Etiaba said : “Anambra needs next, a selfless servant with his eyes on the details, as our next Governor. We truly are ‘The Light of the Nation’ “.

The Razor News gathered that Etiaba’s hosts were delighted with the courtesy visits.

Soludo and Ibezim:  Examples  of Anambra standard of excellence