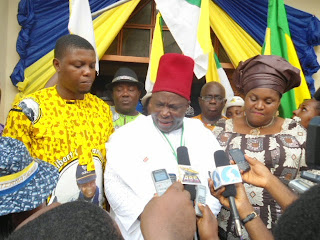 The All Progressives Grand Alliance(APGA) in a state congress held late Saturday, elected a new state executives to pilot the affairs of the party with a promise to move the party to an enviable height.
The newly elected chairman of the party in the state, Sir Norbert Obi said that his executive will work hard to meet the dreams of the founding fathers of the party especially now that the new Board of Trustees chairman, and governor of Anambra State, Chief Willie Obiano has promised to expand the frontiers of the party beyond the state.
The 1,139 delegates who attended the congress voted through voice vote to elect Obi and other members of the executives who were the only ones that purchased forms for the 28 elective positions advertised by the party.
The chairman of the congress committee, Mr Ifeatu Olejeme who called for any form of objection to the election of the executives declared them winners when no one contested their election.
Olejeme said he is not surprised about the peaceful nature of the congress as APGA members have been known for being peaceful and orderly people.
Meanwhile, The out-gone chairman of the party in the state, Chief Mike Kwentoh in an address said that with the poise and dedication of the State governor and BOT chairman, he is sure that the party will grow to be the greatest opposition party in Nigeria.
Kwentoh said that in the last general election, the party contested governorship election in several states and made significant impact in far away states like in Nasarawa and Abia States where it came close to winning.
He said the party has gotten to where it is today because its members worked assiduously to ensure victory in the 2013 governorship election, while urging all to ensure total support for the governor who is committed to moving the party forward.
Some of those elected during the congress include; Tony Oleka, Vice Chairman; Tony Ifeanya, Secretary; Titus Anigbogu, Vice Chairman, South; Chinedu Nnatuanya, Vice Chairman, North; and Barr Nnoli, Vice Chairman, Central among several others.