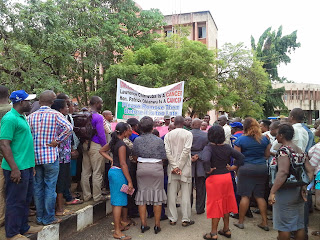 Awka natives drawn from the 20 villages of Ezinano Community, yesterday staged a protest in the capital city against the Anambra State Commissioner for Housing and Urban Development, Chief Law Chinwuba.
During the protest which was led by the two key leaders of Ezinano Community, Comrade Obi Ochije and Reverend Victor Nnebe, the restive Awka natives who had marched across the major streets down to the State Secretariat in Awka, accused Chief Chinwuba of using his office to acquire Awka lands without any consideration to the interest of the customary owners who have become virtually landless.

And as the protesters moved from the Arroma Junction side of the Awka to Onitsha Expressway and down to the State Secretariat, they carried placards and a mock coffin denigrating the integrity of Chief Chinwuba.

The protesters with their placards, some of which read; Chinwuba rest in peace, RockLand Must Leave Awka among others, had alleged that the Commissioner was in the habit of acquiring and developing Awka lands in to several plots without paying due compensation to the Ezinano people- the customary owners .

A key leader of the protesters who reeled out their grievances to the Head of Service; Mr Chidi Ezeoke at the State Secretariat, Rev. Nnebe said they have since sent petitions several times on land matters to the government without any concrete result.

Nnebe who stated that Awka has conceded several lands to the government for various purposes for many years now, contended that it is high time Awka lands are left for the customary owners so that they will have places to build their homes.

In his own speech, Comrade Ochije, demanded that a company known as RockLand Investment Company should not step in to any land in Awka again.

Comrade Ochije who serves as the Chairman of Ezinano Community, pleaded with the Governor to come to their rescue and stop the alleged acts of acquiring the Awka lands for profit purpose and without paying compensation to the customary owners.

Ochije also threatened that they would continue to fight the Commissioner ceaselessly in line with Awka customs until their demands are met.

Addressing the protesters in his capacity as  the Head of Service, Chidi Ezeoke promised that their demands would quickly be sent to the Governor immediately he returns to Awka.

Ezeoke commended the protesters for conducting themselves well and peacefully during their protest and pleaded with them to remain calm and law abiding.