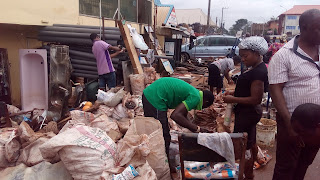 The flood sacked most residents from their houses around the Arthur Eze Avenue and in most other parts, while traders at the building materials market near Odera lost goods worth millions.
The traders who resumed for the day’s duty on Thursday morning found their shops in a pool of water, with most of their wares sailing on it, while heavy wares were all destroyed.
Most of the traders who deal in cement were moved to tears as flood soaked their ware houses which were packed full with cement.
The leadership of the market could not be reached as at the time of filing this report, but one of the traders and a youth leader for Awka, Comrade Obi Ochije said the extent of damage cannot exactly be quantified in monetary terms, as each trader is bearing their loss individually.
He however put the cost of damaged goods in tens of millions, saying that it would not be the first time such is happening.
“Anytime there is heavy downpour in Awka, we loss goods, but today’s own is just too much for us to bear. We are calling on the governor to come to our aid, and assist us by working on the drainages.
“We have a big drainage here, but it is not enough. Water coming from the upper part of Awka, joins the one coming from Igwebuike, and they all move down to this place with force, and in that way it overflows into the roads, then our shops. “
He called on the governor to come to their aid, saying that a city like Awka that is a state’s capital should not be associated with the kind of heavy flood that is witnessed, each time it rained.
In Umuogbu village, also in Awka, the oldest man in the community, Mr. James Ijeomah was yesterday rescued from being carried away by flood as he relaxed in his room.
An eyewitness said, the rain which began in the evening formed a huge flood in Mr Ijeoma’s house, and he only realised when the flood covered his bed. He was said to have been rescued after shouting for help.
Similarly, most residents of Obinagu area have flees their homes, for fear of the flood, just as over four houses have been lost to it.
A resident of the area, Mrs Eugenia Eze who spoke with THISDAY said, “we did not sleep in our house yesterday. Anytime it rained, people in this area do not sleep. Its so bad now that a lot of people have lost properties, while some houses have been abandoned.
Ends.

Fr Ebube Muonso shuts down Eke Awka, Read what he said of the Market and all the charms traders made

OHANEZE LEADERS ARE SHAMELESS JOBBERS, THEY WANT TO HELP FG CAUSE PROBLEM BETWEEN IJAW AND IGBOS, SAYS IPOB