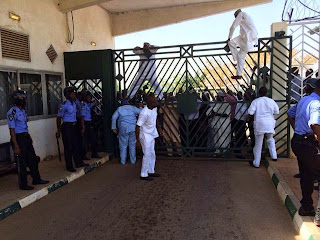 Edo State Governor, Comrade Adams Oshiomhole, has fired the State Head of Service, Mr. Jerry Obazele, whom he had ordered to proceed on compulsory retirement.
Oshiomole’s CPS, Peter Okhiria, in a statement, said the governor also retired the Permanent Secretary, Information and Communication Technology Agency, Mr Dan Aigbavboa.
Another officer hacked by the governor, according to the statement, is the Director Software, Edo State Information and Communication Technology Agency, Mr. Toju Onaiwu.
He asked him to proceed on suspension.
Okhiria in the statement, quoted the governor to have said that “All members of the Edo State Pensions Board are hereby directed to report to the State Civil Service Commission for proper investigation and disciplinary action in accordance with the Civil Service Rules.
“Members of the Pensions Board are advised to steer clear of their offices until investigations are concluded.
“Meanwhile, Governor Adams Oshiomhole has appointed Mrs. Gladys Idahor as the new Head of Service, Edo State.”

I will beat Umeh again - Ekwunife