Mr Emeka Udodeme, Anambra State President, Ohaneze Ndigbo, has called on Traditional Rulers, Religious bodies and other community leaders in Anambra to be an agent across the communities of the state for social and political development. 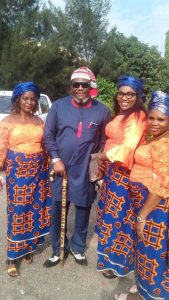 Udodeme made the call during the inauguration of Njikoka Local Government Area Executives Chapter of Ohaneze Ndigbo in the state.

THE RAZOR NEWS reports on Saturday in Abagana, Njikoka Local Government Area of Anambra that Udodeme urged the new executives to liaise with its community leaders to achieve a grassroots conscription of the dwellers for general good of the state .

Udodeme, said that reasons for grassroots mobilisation would engender peace and development in Igboland, which Ohaneze Ndigbo Worldwide stands for.

He said that if the right attitude to life are preached to the public from the grassroots level and the message is well appreciated at various levels of the polity that the degrees of destruction’s of properties and killings would be drastically reduced.

“If the leaders get the youths to imbibe good morals and show respect to instituted authorities and cultural values placed on track many social ills recorded in the society of today would be very minimal. 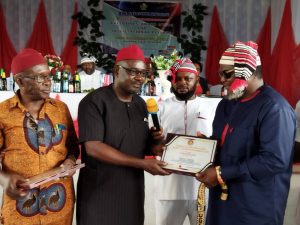 “Therefore we need to work hard to get the local dwellers well informed about rights living,”he said.

Udodeme said that every Igbo person from eighteen years of age is eligible for membership of Ohaneze Ndigbo and encouraged the people to join the group at their local council areas or place of domicile .

“If the eligible person joins the group and exchange of ideas are done, better ways to do things differently would be proffered to push the growth and development of the state in all sectors of living,” he said.

He urged the public to be part of the political movement ongoing in the state currently and appealed to Anambra public to come out en-masse on Nov.6 to exercise their franchise.

“ It is a civic responsibility of every adult in Anambra to participate in election to vote their choice of a leader.

“Community leaders you have work to do, reshape the mind set of the people to be concerned about activities ongoing in their environment,” he said.

He charged the newly inaugurated executives of the council area to see themselves as servants and work as a team to achieve huge success in grassroots awareness for right attitude of the people towards societal development.

Mr Romanus Obeleagu, the newly inaugurated chairman in his acceptance speech commended the public who made out time to be part of the event,

He said that the aims and objectives of the chapter which included, working with security agencies to ensure peace and security in the area, promoting Igbo language and culture, among others would be upheld.

Obeleagu assured a team work among its executives and appealed with people of the area to give the team financial and moral supports to enable them achieve set goals.

Razor reports that part of the activities to mark the inauguration of the new council executives of Njikoka Ohanaeze council area included installations of patrons and awards to its deserving people.

Others are Chief Bonny Nkwuaku,Chief Ekene Okaf-Omabu and Chief Chinedu Enemuo was presented with an award for philanthropic services to the vulnerable people in the state