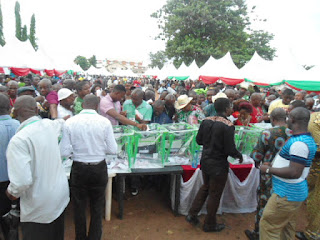 Prince Ken Emeakayi has been elected the state chairman of the Peoples Democratic Party in Anambra State in a congress of the party held Saturday evening, which was also very poorly attended.
The 26 member state executives, whose elections were conducted had only that of the chairman announced by Mr Ike Abonyi the chairman of the congress committee, leaving all wondering if the other positions were not important.
Emeakayi who was the sole candidate for the chairmanship position and said to have been chairman of thre party since the days of former governor, Chinwoke Mbadinuju polled 958 votes, while nine of the votes cast were voided as announced by the chairman of the 5-man congress committee, Mr Ike Abonyi.
Visible signs that the members of the congress organizing committee anticipated trouble as most members of the party expressed disenchantment with the congress was the presence of armed  security operatives with Tope Fasugba, a superintendent of police leading the charge in maintaining peace.
The exercise was however rancor free, but most members of the party insisted that the congress was illegally conducted with the party’s national publicity secretary, Olisa Metuh as the sole mastermind.
The disenchantment of the members of the party over the congress may have further fuelled speculations that majority of the PDP faithful were likely to join the ruling All Progressive Congress, APC within weeks.
The indication was given last week by the governorship candidate of the party during the last governorship election, Comrade Tony Nwoye, while briefing reporters in Awka.
Nwoye and other major stakeholders in the state had called on the party’s national working committee, NWC to shift the congress within five days to give aspirants time to purchase forms as the publication fell within the public holidays when banks were not working.
Furthermore, they said if their requests were not granted, stakeholders would not hesitate to choose another option available to them.
It was gathered at the weekend that big shots in the state PDP like Prince Arthur Eze, Senator Andy Uba, Sir Emeka Offor, Prof Chukwuma Soludo among others, already had their one legs in APC waiting for their foot soldiers to make the pronouncement.
Emeakayi who was hailed by some members of the party after he was announced winner seemed to have gotten winds of the disenchantment of members, leading to his not visibly celebrating his victory.
He refused to address members of the party when he was handed the microphone by the chairman of the committee, Abonyi, and also refused to speak to journalists, but rather sneaked out of the congress ground, into his car and drove off, leaving party faithful in confusion over his behavior despite his purported victory.