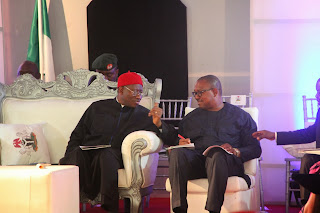 The duo of the federal government and the All Progressives Grand Alliance(APGA) the party under which Governor Peter Obi came to power are in a struggle to retain his services as he leaves office next Monday, HALLMARK has gathered. Since Obi’s tenure started winding down, our correspondent can reveal that on several occasions, agents of the federal government on visits to Anambra State have always made mention of plans to retain the service of the governor when he leaves office. In February, the coordinating minister of Education, Nyesom Wike on a visit to the state to witness the handover of school buses, laptop computers and power generating sets to Schools stated clearly that Governor Peter Obi was too young to be sent to retirement simply because his tenure as governor has expired. Wike said the Federal government planned to keep Obi busy with federal engagements that will make him useful, both to Anambra State and to the country in general. Last week’s presentation of his eight years score card also threw up the same topic as the coordinating minister of the economy, Dr Ngozi Okonjo Iweala told Governor Obi’s wife pointedly that if she was making plans to go on a long holiday with her husband, she should perish the thought. “We have devised ways to keep your husband occupied, so if you have been planning a long holiday for him, am afraid it will not work,” Okonjo-Iweala told Obi’s wife. Meanwhile, sources have revealed to our correspondent that APGA is planning to give the federal government a serious fight if only to retain the services of the out-going governor, which they said will boost the image of the party for further elections. One of the sources said the national chairman of the party, Chief Victor Umeh has met the governor to speak on the disadvantages of him leaving the party to join the PDP-led federal executive council. The source said despite Obi’s calm and gentle mien, he has remained a master strategist for the party and together with Chief Victor Umeh, he has planned most of the victories which the party has gained. Last weekend, Chief Umeh who spoke at the end of tenure report of the governor in Awka was forced to let the cat out of the bag when Dr Okonjo-Iweala openly said that the federal government has provided a space for Obi to come and serve. Umeh told Obi to remember that he is now the leader of the party and now serves in the same capacity that the former leader of the party, Dim Chukwuemeka Odumegwu Ojukwu left behind. Umeh bluntly told federal government to keep off Obi, saying he already has a job as the Chairman BOT of APGA. He also told Obi, “ we will not let you go, you are the leader of our party, so you must forget all the offers. This party gave you fame, so we want to say wherever you eventually find yourself, represent this party well.” Governor Peter Obi has for three years been a honourary special adviser to the president on economic matters, and his appointment; if it works will see him become a substantive member of the federal executive council.

Jonathan flags off construction of 2nd Niger Bridge for N117bn