Facebook Twitter LinkedIn Tumblr Pinterest Reddit VKontakte Odnoklassniki Pocket
The Chief Judge of Anambra State, Justice Peter Umeadi has praised the foresightedness of the Anambra State governor, Chief Willie Obiano in granting financial autonomy to the judiciary in the state.
Umeadi speaking during the presentation of 22 brand new vehicles to the newly appointed magistrates of the state said it was the first assignment the judiciary was performing as an independent arm of government, and that it was made possible by the magnanimity of the governor.
“We are here for the distribution of 22 brand new vehicles to the newly appointed Deputy Chief Registrar, our retired Chief Accountant and the 20 magistrates newly appointed. We were able to make these purchases on our own through the magnanimity of the state governor, Chief Willie Obiano.
“We hope that these cars will assist them in their work, and we also hope that they will make good use of it and always report to work in good time. I am hereby making the presentation on behalf of the state governor to the magistrates,” Umeadi said.
Recall that the Judiciary Staff Union of Nigeria(JUSUN), Anambra State chapter had recently embarked on strike, with financial autonomy as one of the conditions for the resumption of work.
Responding on behalf of the benefiting magistrates, the chairman of Anambra State branch of Magistrates Association of Nigeria, Mrs Vivian Udedike commended the Chief Judge for the acquisition of the vehicles, saying it was eloquent testimony of his deserving the award on him by the union as Father of magistrates.
He thanked the governor for granting financial autonomy to the state, and also for his open door policy of the Chief Judge, which she said made it very easy for him to be reached and consulted on matters concerning the state judiciary.
Meanwhile, the Anambra State commissioner of police, Hassan Karma has said that Anambra State will continue to be crime free as he and his men have made a resolve to ensure effective policing of the state. 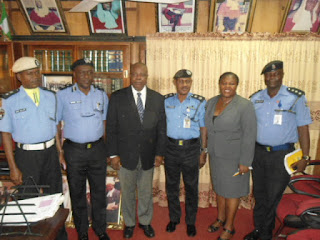 Karma who was on a courtesy visit to the office of the Chief Judge said he and his men are ready to combat any form of crime that may arise in the state, and that the state has remained largely crime free because of their commitment.
The Police Boss said he was in the Chief Judge’s office to rub minds with him as the Police and judiciary has a relationship that can best be described as a senior-junior-brother-relationship.

NANS petitions IG over alleged assault of student by lawyer