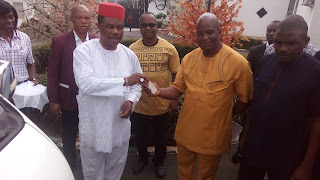 Anambra governor, Chief Willie Obiano many people have testified is a good man. But it is believed that his greatest undoing is the class of people around him who constantly work to shut everyone else out.

On December 2014, Obiano extended invitation to members of correspondents’ chapel of NUJ to visit him in his hometown to celebrate the Christmas. During the visit, obiano appeared as casual as any ordinary man, and threw away the VIP air to interact with the journalists, and calling for ways he could help better their practice in the state.

Besides announcing a gift of a cow, Obiano also promised to present a bus to the journalists, but that remained a dream for about two years now, until yesterday when the bus was presented.

It was believed that the governor genuinely wanted to present the bus, but some aides around him shut him out from doing so, and always frustrating any attempt by the journalists to remind the governor of the bus. It was however not clear what their motive was.

During the Anambra@25 celebration, the correspondents got the chance to remind the governor of it, and he was so embarrassed that a promise he made two years ago was yet to be fulfilled. He immediately called on the SSG and some other close aides to make the bus available. But after months of that the bus was provided and branded, some aides of the governor insisted on not presenting the bus to the journalists.

After an emergency executive meeting of the correspondents two days ago, the journalists decided to make a direct call to the governor and some of his closest aides, intimating him of plan by one of his aides to hijack the bus.

The governor who was visibly embarrassed by the call ordered his aides to immediately drive the bus down to the lodge and include the presentation in the manifest, while apologising for  the delay. Yesterday, the bus was officially presented to the journalists.
BELOW IS THE FULL STORY OF THE PRESENTATION.

Presenting the brand new bus at the Governor’s Lodge on Wednesday at Amawbia, Governor Obiano said it was in line with his promise to the journalists, to provide them with adequate logistics that would aid their duties.

The Governor noted that the bus would assist them to promote  his administrative and excellent works down to the grassroots.

He urged them to promote the good image of the state to limelight and be press friendly to the State.

In his reaction, the Chairman of the Chapel, Mr Emmanuel Ndukuba observed that the last time the Chapel benefited from the state government’s largese was 16 years ago, during the administration of former Governor Chinwoke Mbadinuju, when a 14-seat capacity bus was assigned to the group to facilitate their works.

Mr Ndukuba stressed that the media outfits consists of 41 media organization with the capacity to spread the news across the length and breadth of the country and beyond via traditional and social media.

The Chairman therefore presented the Governor the international workshop titled ” Security and investment : the Anambra example “, which the Chapel is organizing, with the intention to projecting the pillars and enablers of the present government of Chief Willie Obiano.

He however expressed profound gratitude to Governor Obiano and other government officials for making it a great day, promising to bridge the gap between the state government and the correspondents’ Chapel.

Present at the occasion were the Director Ministry of Information and Communication Strategy, Barr Emeka Ohuoha, the Senior Special Assistants to the Governor on media Mr James Eze and Emeka Ozumba and other media personalities.