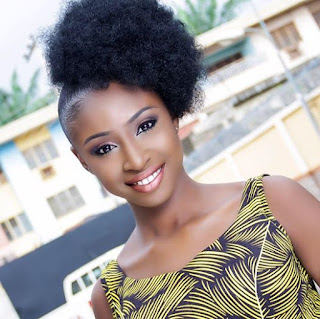 Journalists who gathered for a press briefing by former Miss Anambra, Chidinma Okeke at the NUJ press centre to hear her story over the recently released sex tape on her in a lesbian act left the venue today(Wednesday) when it was gathered that the queens blackmailers had hired assasins to silence her if she revealed anything about the tape.

Some of The journalists who had waited had to leave in fear as it was not clear if it was true, and for fear that if she came, her attackers may also extend their aggression to journalists.

Attempt to get her Lawyer to speak also failed, but www.elekenews.com went after him and succeeded in catching a telephone interview with him.

Barr Ikenna Obidiegwu, counsel to Miss Chidinma Okeke, winner of 2015 most beautiful girl in Anambra pageant yesterday stated that her client’s blackmailers were powerful people, and that at the appropriate time, their identity would be unveiled.
Obidiegwu spoke to www.elekenews.com on phone after a scheduled press briefing by Miss Okeke was stalled as a result of her inability to attend the briefing.
www.elekenews.com learnt that she could not brief  journalists as a result of alleged threats to her life, over scandalous sex tapes that were leaked recently, in which she was captured in a lesbian act with another lady.
The videos which have generated huge uproar from members of the public were allegedly circulated by some people, who were accused of having serially blackmailed the queen.
As early as 11:30am, journalists who were invited to the NUJ Press Centre for the briefing were all ready for the briefing, in anticipation of the beauty queen’s arrival, when suddenly words went round that she would no longer address the press on account of threats to her life.
A message sent by the embattled queen using her Facebook account reads in part, “The moment I made public this intention to speak with journalists, I have been under siege of threats by my blackmailers and traducers.
“They are seriously threatening to shoot me at the press conference if I ever open my mouth to say the real truth about the ugly episode. Since I have no protection and if I die now the truth will be buried forever, it’s my intention to sacrifice myself to save not just myself but other girls and other upcoming pageant by letting the world know the truth and what we go through.”
The queen cried that her traducers have continued to assemble all manner of expertise and professionals to edit the video and send them in batches, and that she will not be surprised if more videos resurface.
Meanwhile, her counsel, Barr Obidiegwu told www.elekenews.com in a telephone interview that his client had to stay away from the press briefing after his attempt to get the Anambra State police commissioner, Mr Sam Okaula to provide security for the queen failed.
“The commissioner said the notice was too short, and that he cannot mobilize police security for the queen immediately.”
He denied reports that his client has been smuggled out of the country to Ghana, saying he was with her just 30 minutes before speaking to our reporter.
Obidiegwu said his client was passing through a very trying phase in her life and called for prayers from Nigerians to help her pill through.
Meanwhile, the organizers of the Miss Anambra Beauty Pageant, Anambra Broadcasting Service(ABS) while speaking through MD and CEO, Nze Uche Nworah said the management will speak at the appropriate time on the matter.

EKWUNIFE, OBIANO, NWOYE OTHERS TOP LIST OF ASPIRANTS JOSTLING FOR TICKET TO RUN FOR ANAMBRA GUBER