Facebook Twitter LinkedIn Tumblr Pinterest Reddit VKontakte Odnoklassniki Pocket
In the bid to rid the nation of criminal activities and institutionalised the fight against illicit drug trafficking in Nigeria,the state commander of the National Drug LAw Enforcement Agency(NDLEA) has advised stakeholder  to include drug free education in the country’s secondary school curriculum.
Addressing a team of Anambra Online Publishers (AOP) in Awka, the Commander of the National Drug Law enforcement Agency, (NDLEA), Mr. Sule Momodu charged parents and government of all tiers to champion programmes that will promote cultural value and eschew ethnicity or religious bigotry which is the panacea to virile nation building.
He lamented that the country had had it better in the 70s-80s where values and regard for Nigeria among Africa nations are respected but charged parents to assist government to ensure the eroding value of Nigeria is restored. 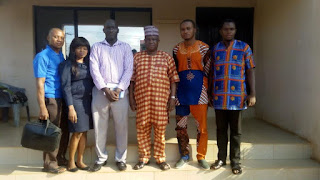 He noted that institutional transformation that Nigeria needs may not be achieved by just rhetoric statements, but the willingness to restore values to the front burner would be achieved if leaders should display exemplary leadership quality that would be reciprocated by people with the hope to sharpen the nation’s economy with vigour.
He went further to say that the architecture of a national brand connects values, service-delivery, quality control, ideals and standard operating procedures, in a seamless garment of national identity, whilst saying that national development and fight against criminal tendencies are both implicit and explicit in the rhetoric and conduct of the national project that all and sundry are drivers in the same vehicle.
Momodu urged online publishers to use their medium being the most accessible medium of news dissemination, as tools of whistle blower and to check excesses of some public office holders where due diligence and reward to deserving public office holder are rewarded whiteout sycophantic attribute.
While speaking on the backdrop of challenges faced by the command in Anambra state, he grieved over the menace of illicit drug trafficking by five persons in Obosi, Idemili North LGA of Anambra state, described it as worrisome and called on the residents to avail the command with useful information to arrest notorious drug kingpin in their area.
NDLEA Commander however buoyed the command resolve to rib Anambra state of drug trafficking if not eliminate it, noted with regret that Obosi as spotted as a trouble zone would need the implicit support and cooperation of residents of that area to provide the agency with information that would aid their operation .
He solicited further for improved logistic and manpower to overrun the activities of these major drug dealers who turn people to junkies in the means of making money.
His word;’’ We have been working, and as our resources get better, we need to have vehicles, we need to have other logistics and if all these are made available, they will enhance our ability to rid Anambra of illicit drugs
The kind of campaign we need to do we have not been able to do it because our resources are limited.
We run two radio programmes because it is not everybody that listens to radio programme.
We also run a quiz contest for the secondary schools in Anmabra but not every school is participating, we don’t know why?.
The government has said every school should establish a drug free club but we have not been able to verify this because the school authorities are not there to support you, that it the school authorities”.
Continuing; ”projection of NDLEA in Anambra is to say that we want to reduce to the barest minimum the issue of Illicit drug trafficking and abuse and if possible eliminate it.
You may not be able to say you will arrest ten this year or 15 this year no, the only projection is to reduce it and if possible eliminate it .
I know that as time goes on and with a better working environment and with a better resources, everything better, I am sure that will reduce it .
We are working, the projection someone may likely make is to say we are going to work seriously to get at the Drug dealers at Obosi, that is my biggest headache in Anambra .
How to get those who are behind illicit drug trafficking in Obosi, those who are selling the drugs to the people who are now junkies, once you get rid of those persons , Obosi would be free from drug menace.

Earlier in the courtesy visit, the exco of Anambra Online Publishers, headed by the state coordinator, Mr. Bamidele Ajayi had requested the command working relationship with the union to assist in information dissemination and ensuring the online service become one of the news hub use to expose illicit drug traffickers in the state.