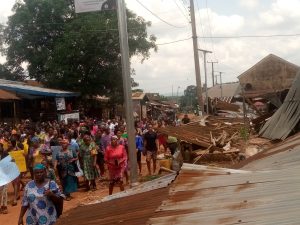 Traders at the Nkwo Umunze market have protested arrest of their leaders by a property developer in the area, Chief Ben Oranusi.

They also decried the demolition of some portions of the market by the developer.

The traders, mostly women, accused Oranusi of forcefully ejecting them from the “traditional Nkwo Umunze market and coercing them to move into an ultramodern market he was building in the area.

They said the developer should allow the two markets coexist, instead of ” robbing Peter to pay Paul” in the circumstance. 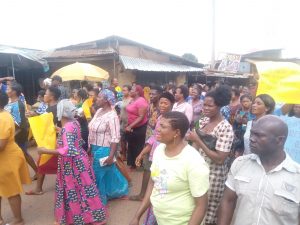 Carrying placards of different inscriptions, the traders said the women and other petty traders in the area did not need an ultramodern market to sell perishable produces.

Some of their placards read,” Umunze deserves more market but not to demolish the one already in existence”, Our dear listening governor Willie Obiano should please come to our aid, Ben Oranusi is using DPO Umunze to intimidate us,” “Nkwo Umunze is as old as Umunze community.

One of the traders, Izuu Nwankwo said the traders were not against having more markets in the area, “but the traditional market that was established about 50 years ago should not be demolished.”

Another Trader, Okey Nzebafor who was a one-time chairman of the market said the market leaders and the town union leadership had reached an agreement with representatives of the state government for the two markets to coexst but the developer was going contrary to that agreement for selfish reasons

He said “Some of us are ready to take up shops at the new market when completed, other people from other towns will come to trade there to and it will be a big market, so let the developer complete it first because as it is now, nobody can trade there”.

The protesters accused the developer of using security agents to harass and intimidate the tradess adding that the situation could degenerate into a chaos if not checked.

They said two of their leaders were still in detention, 10 days after they were arrested for trump-up allegations by Oranusi.

A woman leader at the market, Alice Okeke said the site of the ultra modern market had not been developed for traders to move in , wondering why the developer was forcing them to relocate to the new place.

Reacting, Oranusi said the traders were being asked to relocate to the new market in their overall interest because the old market was no longer condusive for modern business.

While stating that the old market had no facilities, such as toilets, Oranusi, said place was accident-prone due to its location at the busy centre of the town.

He said,” There are always accidents in the area, claiming many lives due to the way people trade on the roadsides .
We can’t continue that way in a 21st century world.”

Paucity of funds: Obiano may sack 300 aides before December