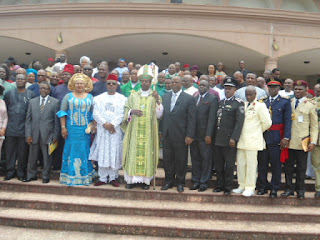 –       Pledges to sort things out
The Anambra State governor, Chief Willie Obiano has accepted that truly, citizens of the state are being milked through multiple taxation avenues.
The governor while speaking with journalists after a catholic mass to mark the 55th independence anniversary of the country said he was aware that traders and other investors in the state were facing multiple taxation, but that he is working hard to resolve the matter.
Recall that FIDES had previously carried a story of traders and other investors in the state complaining that the tax burden on them under the current administration was way over their capacity and needed to be adjusted or harmonized.
In what looked like a reaction to the story, Obiano laid the blame on the door steps of fake government agents who manufacture all sorts of taxation and enforce it, even  when the monies do not get to the state government coffers.
“Obiano said, “we are looking into issues of multiple taxation and people posing as government agents, and all that would be sorted out soon. I urge the people to always pay their taxes and together we will get Anambra to greater heights.
“I am assuring the people that we will keep up security and as you can see, night life has returned and our prople are happy. All hands must be on deck for us to get things right in this state.”
Earlier while addressing catholic faithful, Obiano said that 55 years in the life of any man is a long way, but in the life of a nation, wast still short. He said if Nigeria must attain greater heights, then the people mujst be ready to make sacrifices.
Obiano said APGA was the party to clean up and move the society forward, and the Igbos must first identify with their party and use it as an instrument to move Anambra forward before replicating same in the south east and Nigeria.

‘Nigeria’ll not be healthy until youths are empowered’