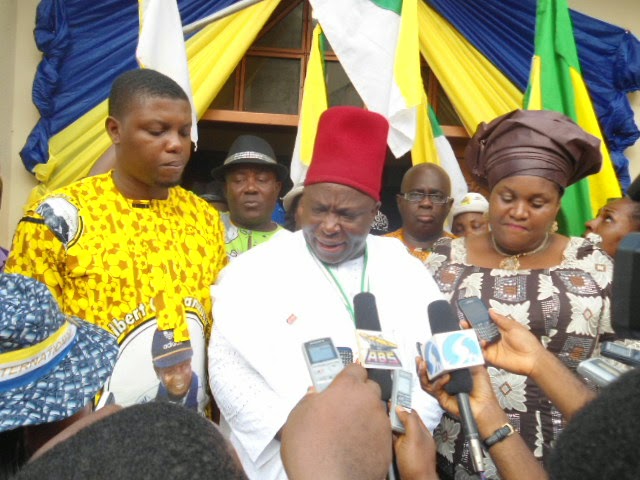 -Urges Buhari to investigate irregularities in presidential polls
The National Chairman of the All Progressives Grand Alliance, APGA, Chief Victor Umeh has filed a petition before the National Assembly election tribunal panel, challenging the outcome of the 28th March senatorial polls for Anambra Central zone.
He also called on the President-Elect to ensure that one of his first assignments when he ascends to power is to investigate electoral fraud that trailed the presidential election in the south east which he said agents of the ruling party have always taken advantage of.
Umeh filled the petition on Saturday Night at the Anambra State Judiciary complex, Awka, where it was registered by the secretary of the tribunal panel, Mrs Josephine Akporube, under the suit number; EPT/Awka/S/16/2015.
Speaking with journalists immediately after filing his petition, Umeh stated that he decided to challenge the result of the election in which the candidate of the Peoples Democratic Party, PDP for senate in Anambra Central zone, Hon Uche Ekwunife was declared winner because of the magnitude of irregularities perpetuated by the PDP in the election.
Umeh said he was not going to court because he was particularly involved in the election which witnessed massive rigging, but was compelled to seek redress to ensure that things are done right, just as the country is experiencing change through the victory of Gen Muhammadu Buhari, let the change be all encompassing.
“I decided to come to court to challenge the process which we had on 28th March because it was flawed, the agents of PDP in Anambra State manipulated the process, and for the sake of the people of Anambra State who came out in large numbers to vote for APGA in that election.
“We have enough documentary evidence to show that we won the election, and we have brought here certified true copies of documents, which we have presented before the tribunal. We are hopeful that we will reclaim our mandate because it is not the first time we have done this.
“I also want use this opportunity to call on the president-elect, Gen Buhari to investigate the presidential election in the south east. It has always been the norm for PDP bigwigs in the east to sabotage the people.
“It was the same in 2007 and in 2011. Buhari himself knows, so his first assignment when he is sworn in would be to investigate the election in the south east with a view to punishing electoral offenders, and also champion electoral reforms. Not the type Goodluck Jonathan did.
“We believe that our coming to court will help us to retrieve our mandate, and the electoral reform which the president-elect will champion will help us to achieve success. He himself knows, and in 2011 he refused to go to court because he did not achieve anything in the ones he had gone previously. So he must champion electoral reforms.” Umeh said.

Aisha Buhari: Profile of the classic first lady that will replace Mama Peace