The Senate has thrown its weight behind the decision of the Federal Government to fix the pump price of Premium Motor Spirit, better known as petrol at N145 per litre, but urged the government to liaise with the labour unions to avert the proposed nationwide strike. 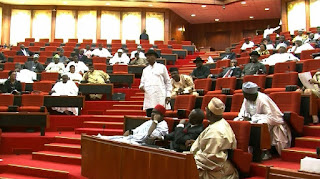 Rising from a closed-doors session presided by the Deputy President of the Senate, Chief Ike Ekweremadu, the Senate empathized with Nigerians for the hardship that the new price of petrol will cause and called on the government to implement the palliatives.
Reading out the resolutions reached at the executive session, Ekweremadu said, “The Senate in a closed session deliberated on the increase in the pump price of PMS by the Federal Government and the threats by the organised Labour to embark on a nationwide strike.

“We resolved as follows: that we sympathise with ordinary people of Nigeria on the hardships they are going through.
“That the Senate will engage the Federal Government to find sustainable ways of improving the welfare of the people of Nigeria.
“That we call on government to continue to engage the organised labour and other stakeholders to resolve issues in order not to ground the system and impose more hardships on our people.
“That government should immediately start implementing palliative measures contained in the 2016 Appropriation Act passed by the National Assembly,” the Deputy Senate President said.CULLED FROM DAILYPOST.NG