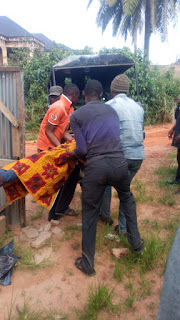 body of a tricycle operator, Mr Sule Muhammed has been discovered in an uncompleted building in Okpuno area of Awka.

Mr Muhammed WWW.ELEKENEWS.COM gathered was axed on the head and other parts of his body, while his tricycle was found around the uncompleted building where his body was dumped by his assailants.

Muhammed, a native of Kogi State had been declared missing by his wife and elder brother after he failed to return home on Thursday night, leading to the police being alerted.

His body was however found on Friday evening by a team of policemen and natives of Kogi State resident in Anambra who launched a manhunt for him.

Anambra state police public relations officer, Mrs Nkeiruka Nwode who spoke with our correspondent confirmed the incident, saying that investigation into the matter has been opened.

She however said that, “for now, we can not say who his killers are, or the reason for his being killed. Our men have moved the body to the morgue for autopsy, and I can assure you that it won’t be long before we get his killers.”

Nwode also stated that an axe, which may be one of the weapons used in killing the deceased was also found close to his body.

Some respondents have also stated that the attack may not be unrelated to cult activities.

President of Association of Non Indigenes living in Anambra State, ANIAS, Comrade Ferguson Okpara in an interview with our correspondent after the evacuation of the body condemned the killing.

He said the deceased’s brother reported to the association, leading to the contact of the police. He said the murder of Muhammed may have likely occurred at about 11pm on Thursday.

“His brother alerted us when he waited till 10pm on the faithful day but did not find his brother. He had continuously called the deceased’s phone number but he failed to pick till the line went off entirely.

“At that point, he was scared and started calling all his Igala brothers and friends to inquire if anyone knows Sule’s whereabout, but all efforts remained futile, until today(Friday).

Okpara urged members of his association to be circumspect while carrying out their daily task, and to also shun acts capable of tarnishing their names and reputation, especially as they are not from the state.