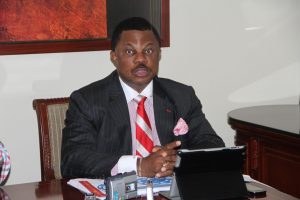 The Anambra State governor, Chief Willie Obiano has instructed that 24 hours security be mounted at all offices of the Independent National Electoral Commission(INEC) in the 21 local government areas of the state.
The governor also instructed that fully equipped fire fighting trucks be stationed at each of the offices, including the state headquarters of the commission in Awka.

Obiano was reacting to the fire incident at the State INEC headquarters on Tuesday, which gutted over 4,000 smart card readers meant for the conduct of Saturday’s presidential and national assembly election in the state.

The state commissioner for information and public enlightenment, Mr C.Don Adinuba stated this in a press release made available to Elekenews.com in Awka on Wednesday.

Adinuba said, “Gov Obiano has also directed a massive deployment of fire fighting facilities like trucks at the INEC headquarters immediately, complete with the appropriate number and caliber of personnel.

“The Anambra State Government is committed to ensuring that all the elections are held in the state not only as scheduled but also in a free, credible and transparent manner. The Government notes with satisfaction the prompt and professional manner in which the Anambra State Fire Service mobilized to the scene once the fire at the INEC headquarters was reported to it. Its swift response contained the fire.”

He added that the governor was yet to be briefed by the new Commissioner of Police in the state on the extent of the fire and possible causes, but has directed that security inside and around the INEC state headquarters as well as in and around INEC offices in the 21 local government areas in the state be fortified immediately.

Group to use advanced technology to Catch election Thieves in Anambra