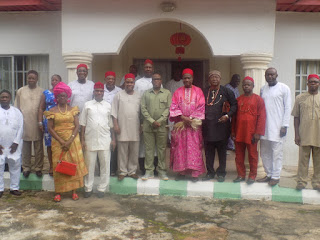 All the 327 councillors that make up Anambra State may this week stage a mega protest against the government of Chief Willie Obiano on grievances bothering on non-payment of their entitlements, ELEKENEWS gathered.

A source who is also a councillor in a chat with our correspondent said the protest would have been held in the past week, but the councilors were prevailed upon by the leadership of the umbrella group for councilors, Anambra State Councilors Forum, ASCOF, Hon Anayo Okpalaeke.

“Hon Anayo Okpalaeke, had to quickly convene a meeting of the executive, last Monday, July 18, and reached out to the aggrieved councillors, pleading with them to exercise patience and allow the leadership to dialogue with the governor.” He said.

ELEKENEWS gathered that the councillors who reluctantly agreed to stay action on condition that government acted promptly, are still bent on going ahead with the protest. This, our correspondent learnt was because they perceived that government may not heed the voice of the leadership to pay their entitlements.

Okpalaeke, during a meeting with the councillors had said he was aware of the grievances of the councillors but however, believed that dialogue was the key. According to him, it was possible that the governor was unaware of the matter which was why there was need to parley with him.

He was quoted to have said, “Obiano has a human face and will not want his foot soldiers to be suffering, especially when the people concerned are very important to the party and government. But the councillors should exercise restraint as the governor has been contacted and is looking into their matter which he has taken as priority.”

The councilors insisted that the non-payment of their entitlements and project funds have hampered their performances in their various wards, and rendered them unelectable by their people, while the governor continues to hire more aides, despite having about 600 already.

Some of their grievances according to a document put out by the forum include; The slashing of their basic salary of N79, 174.00 to N43, 774.00 monthly, yet had been unpaid for 2 years.

They claimed that at the inception of the councillors’ two years’ term, at a meeting with the governor, the then commissioner for Local Government Affairs, Hon Mrs Azuka Enemuo, and former Political Adviser to the Governor, Chief Joe Martins Uzodike, the governor personally acknowledged and promised to pay the councillors all their statutory allowances, plus car loans.

ELEKENEWS recalls that the tenure of the elected chairmen and councilors of local governments in Anambra State elapsed in January, but the state government has been unable to hold the a fresh election into the councils, but has continued to use the chairmen and councillors on transition committee basis for the 21 councils of the state.

APC'll Chase Obiano out of Government House Next year - Ngige