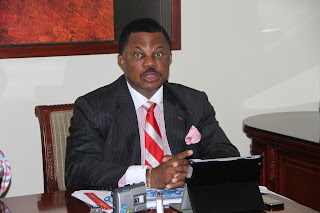 WWW.ELEKENEWS.COM can authoritatively report that plans are in top gear to field Senator Andy Uba as the governorship candidate of the All Progressives Congress, APC candidate of the 2017 governorship election in Anambra State.
It was also gathered that Senator Uche Ekwunife will also run on a joint ticket with the 17-day former governor of the state, making it what political analysts have termed a crack squad for the forthcoming election.
Our source said that the decision was reached by the highest decision making body of the party, which took time to consider the strength of the candidate and his running mate, part of which included their financial muscles.
This was especially taken into consideration on the grounds that APC needs to control Anambra, and that even at that, the federal government may not bankroll the election for the candidate, but will give tacit support as have been seen in other states where governorship elections have been held since the APC government came to power.

Meanwhile, WWW.ELEKENEWS.COMgathered that Governor Willie Obiano of Anambra State, who may likely run on the platform of the All Progressives Grand Alliance, APGA has been making frantic efforts to reach out to the leadership of the APC to strike collaboration with them.
Obiano has made several advances to the party, having understudied how ex governor Peter Obi was able to win the heart of the Goodluck Jonathan led PDP government, to the point of being in control of his campaign machinery in the South East, despite being of APGA, decided to replicate same with APC.
However, Obiano is said not to have been very lucky, as powerful forces, including those working for Andy Uba and Uche Ekwunife have continually rebuffed his efforts to get close to Buhari or other top members of the party.
This blog gathered that Senator Andy Uba who has also joined forces with Ekwunife has enlisted the support of Obasanjo who was the brain behind the acceptance by the APC to field the duo for the election, and also tried to block off other serious contenders on the platform.
Uba had recently sneaked into APC, without a formal declaration as he is wont to do. A source said the idea of not making a formal declaration was to ensure that some elements who were also jostling for the same ticket do not go to work to scuttle it.
Uba had severally run for the governorship of the state in previous years, and in various political parties, but his nearest to clinching the seat was in 2007 when he won the election through the help of his political godfather, Chief Obasanjo, but was latter tossed out by the court after occupying the seat for only 17 days.
Analysts have also flayed the choice of Ekwunife as deputy for Andy, saying that for one who also has an eye on the coveted seat, it would be risky for Andy to run with her, especially considering her exposure, political clout, connections And support base.
An analyst who craved anonymity told WWW.ELEKENEWS.COM that, “If I were Andy, I will look for a less known person for a the choice of a running mate, but maybe, Andy has considered all these, and still decided to field her, which means that he knows how to curtail her excesses if it comes to play.