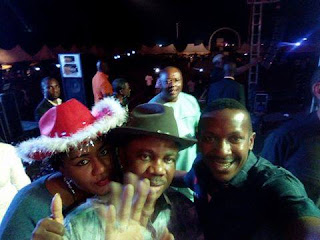 A musical concert to mark the 25th anniversary of the creation of Anambra State, an event which was also supposed to mark the official end of the Anambra @25 on Saturday night flopped.
The concert which the governor had while briefing journalists in August at the startment of the anniversary said was going to parade stars in the music industry, most of which would be Anambra born, ended up a disappointment as only less known artistes were invited.
www.elekenews.com gathered that save for Slow Dog who cannot exactly be said to have really found his footing in the very expansive Nigeria Music industry, every other artiste that performed for the night were acts who were upcoming.
Though there were scores of young people who trooped out for the show, but the crowd was said to lack quality audience and ended up being a show for ‘small boys and girls’, who though were disappointed over the quality of acts still had fun.
Anambra Governor, Chief Willie Obiano who stormed the Ekwueme Square venue of the concert at about 10pm could not hide his disappointment when the names of the acts who were billed to perform for the night were reeled to him by the event’s master of ceremony.
Obiano told the organisers pointedly that he was disappointed at the names being mentioned as artistes to perform for the concert. He added that all the names mentioned, none was familiar to him, and almost came short of querying the organizers on why known names in the industry, most of whom are from Anambra were not invited to the concert.
The likes of Phyno, Flavour and P Square had been touted to be the ones to play at the concert, especially because they are raves of the moment in the music industry and more because they were Anambra borns and would be performing before their kith and kin, and most importantly their governor.
A source told this blog that the governor who came in the company of his beautiful wife was ready to unwind all through the night, but the anger of the organizers bungling the show and possibly blowing funds allocated for the payment of top artistes had to leave the arena immediately.
The concert which descended to the level of the organizers conscripting members from the crowd to come up stage and perform also witnessed attendance from the deputy governor, Dr Nkem Okeke who later arrived in the company of the SSG, Prof Solo Chukwulobelu also left the venue after staying for a while.
www.elekenews.comgathered that the governor had also invited Senator Ben Bruce to the show, but both men left after seeing that the show was not worth all the hype.
Obiano however did not leave without displaying some pomp by releasing colourful fireworks which rent the skies, and also wishing all in attendance a happy concert.
This blog gathered from a source that an undisclosed amount had been budgeted for the payment of some top artistes who are from the state to perform, but the inability of the organizers was part of the governor’s annoyance.