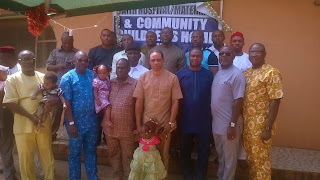 Awka Ambassadors Club, a social club consisting of young elites who are Awka indigenes have donated over 10,000 books to pupils of selected primary schools in the Anambra State capital.
Engr Jude Obioakor, who represented the club at the distribution of the books said the gesture is in commemoration of its 25thy anniversary of the club, and meant to support the free education policy of the governor, Chief Willie Obiano, saying that education cannot be left alone in the hands of government alone.
Some of the benefitting schools include; Central Primary School, Awka,  Community Primary School, Umuokpu and Igwebueze Primary School 1 and 2, where 1,000 exercise books each were distributed.
Students who came first, second and third in their respective classes in all the schools visited were rewarded with seven exercise books each, while all the pupils of the benefiting schools were all given three exercise books each.
Obiakor said the rationale behind the method of distribution was to encourage all the pupils to work hard and also show them what they can receive as benefits by taking their studies seriously.
Indigent children and children with special needs were also given the exercise books to aid their studies.
Obiakor who is the chairman of the 25th anniversary planning committee told our correspondent that a number of activities have also been lined up for the event which comes up on 30th December 2016.
He stated that the club which is made up of men of means around Awka town, with over 300 members around the country was distributing the books as it contribution to uplifting and encouraging pupils to attain education, which he said remains the bedrock of meaningful achievement in the modern world.
The anniversary celebration which has been slated to hold on 30thDecember will also host the Anambra state governor, Chief Willie Obiano, while some deserving members of the club will also be honoured.
ENDs.