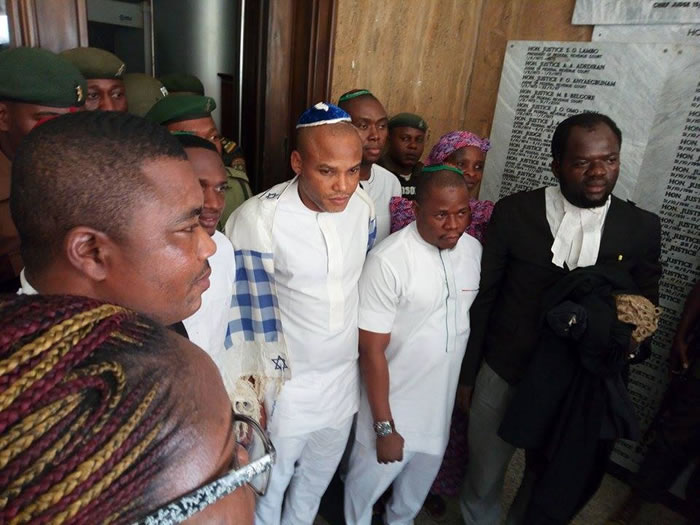 The Indigenous People of Biafra (IPOB) has raised alarm over what it called the conspiracy between the FG and some State Governors to conceal the true impact of the Amnesty International reports on the killings of its unarmed peaceful members.
The group said the three governors from the south east and south south from APGA and PDP have been holding meetings to water down the Amnesty International report released on the series of killings of its members by armed security agents on the order of the federal government.
In a press release sent to THISDAY in Awka by the publicity secretary of the group, Comrade Emma Powerful said the governor’s have been meeting with the Nigerian Army to perfect the plot.
Part of the release reads, “IPOB Intelligence unit discovered how these three governors held series of meetings to rent a mob of poverty ravaged individuals in the society, to protest against Amnesty International reports which indicted this current Nigerian Government and her security agencies especially the Nigerian Army.
“We are mindful of the current trend of this APC led government to rent a mob of miscreants for the paltry sum of 1,000 Naira per protester, to put up a show of shame against any group or individual that dares to challenge them with facts and figures.
“Therefore, we call on all Biafrans and lovers of freedom to beware of the proposed protest against the Amnesty International reports on the killings of unarmed peaceful members of IPOB sponsored by these governors(names withheld) with the help of a few Igbo and South South retired military personnel.”
The group said the accused persons have even perfected plans to rent people who will claim they are IPOB members to help cement their lies. It said their aim was to thwart the arrival of an independent world investigative team that is slated to come to Biafran to conduct a thorough public enquiry.
IPOB expressed hope that justice is near at last, as all

who are complicit in the killing of IPOB members will never go unpunished as these are crimes against humanity.

APGA's Soul Has Left It, Only Carcass is Remaining - UPP