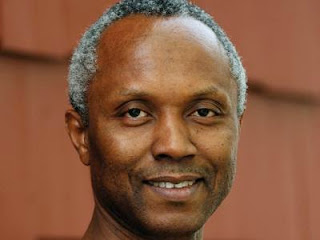 Prof Okey Ndibe, a professor in the University of Connecticut, USA and award winning writer and columnist with Saharareporters.com and The Sun Newspaper yesterday in Awka said that he is not a fan of government at any level. Ndibe was speaking at a book reading ceremony organized by the Anambra State Broadcasting Corporation(ABS Radio and TV) tagged a literary evening with Prof Okey Ndibe, and which featured the reading of Prof Ndibe’s latest work of fiction, Foreign gods inc. The erudite professor said that it is not his making that he is not particularly a fan of any government, but his writings are borne out of a desire to make the leaders of Nigeria to do the right thing and provide dividends of democracy to the masses. “I am not a fan of government, I write out of profound passion for change. Nigeria is a country conceding hope but led into hopelessness by its leaders.” Ndibe said. He stated that his book reading in Awka was the best he has had anywhere in the world, and that was because he was reading in his home state in the presence of his mother, brother and peers with whom he grew up decades back. Addressing the gathering, the organizer of the programme, Mr Uche Nworah the Managing Director and Chief Executive Officer of ABS said that the idea of the event was to bring people together to share knowledge, and not necessarily in a disco party. Nworah said, “We decided within three days to package and hold this event. We spoke with Okey and other people and I am happy that it is a success today. This is the first time an event like this is holding in Awka, and we cannot have people like Okey around who are well sought after and afford not to take from his knowledge.” Also speaking, the commissioner for information in Anambra State, Chief Tony Onyima said there is a new spirit in Anambra, and the government is bringing extra-ordinary talents to the state. “This is the first time an event like this is holding in the state, and this is just a part of a larger show we are packaging. Our dream is to bring home all the wave making artistes from Anambra origin from all over the world. “We will be at Alex Ekwueme Square on 26th December, and all the big musicians from Anambra origin will be there, and we will bogey down from 6pm until early hours of the next day. So you can see that things are changing in Anambra. “We have first secured the state and there will be no fear of robbery, kidnapping and any other vice of such.” Onyima said. The reading was attended by several published authors in the state including the Secretary to the State Government, Oseloka Obaze, the traditional ruler of Obosi kingdom, Igwe Chidubem Iweka and others. END.