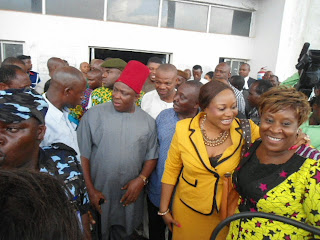 The Chief Maxi Okwu-led faction of the All Progressives Grand Alliance (APGA) has criticised the party’s Special National Convention conducted on Dec. 17 under the leadership of Chief Victor Umeh describing it as “continuation of impunity.” The factional state chairman of the party loyal to Okwu, Mr Shedrach Anaekwe, made the observation in an interview with newsmen in Awka yesterday. It could be recalled that the convention had among other things adopted President Goodluck Jonathan as its presidential candidate in the February 2015 general elections. It also ratified the appointment of Gov. Willie Obiano of Anambra as the party’s national leader and Board of Trustees (BoT) chairman. The convention further approved the extension of the leadership of the party at all levels to not more than 120 days if elections were not conducted for unforeseen reasons at the expiration of their tenure. However, Anaekwe argued that some of the amendments in the party’s Constitution were carried out for selfish purposes. According to him, from inception, the APGA Constitution does not permit the extension of anybody’s tenure by a single day which is why we are already in court. “Again, a serving governor is only the leader of the party in the state and not the national leader of the party. “They forged ahead to ratify his appointment without amending that aspect in the Constitution. “One had also expected that the convention would have replaced Chief Umeh with another person as acting national chairman pending the main convention of the party. “The convention would have been an avenue to reconcile aggrieved members, bring peace back to the party and pacify those not happy with situations of things. “That was the expectation of the party faithful but rather, it became a continuation of impunity,” the factional state chairman said. He however supported the adoption of President Goodluck Jonathan as APGA presidential candidate, saying that it was a general decision for anyone who love the country. Anakwe, who noted that a congress by the Okwu’s faction had ratified his appointment as the state chairman of the party, expressed confidence over APGA’s victory in the 2015 general elections. He urged all party members in both factions to go into the general elections as one pending the determination of the suit by the Supreme Court over who the authentic national chairman of the party was. END

I am no fan of any government, says Okey Ndibe