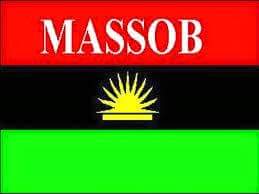 The Indigenous People of Biafra, IPOB, has been described as a toothless bulldog, which does not possess the capacity to carry out the numerous threats it has been issuing lately.
A pressure group, #iStandWithBuhari made the declaration in a press briefing Saturday, saying that it was not true that the people of the Southeast hated President Muhammadu Buhari.
The group speaking through its Southeast media director, Ebube Mbonu assured President Buhari that he is very much loved by Southeasterners, unlike the IPOB tries to portray.
“We the people of the Southeast stand with Buhari. We will no longer keep quiet and allow some faceless people continue to put the region in such a bad light that attracts nothing but hate and enmity for our people and our land,” the group said.
It recalled that two weeks ago, the group had defied the threats of the IPOB, who had threatened fire and brimstone if it held a rally to support President Buhari, but when it held the solidarity rally, not even a finger was raised in opposition.
Mbonu spoke further saying,”We find it rather disturbing that IPOB continually seems to make statements that indirectly ascribes to itself influence and supposed authority over what happens in southeastern Nigeria, an erroneous impression which was propagated by misguided individuals.”
The group wondered how IPOB could ascribe to itself the powers to dictate how and what should come to Ndigbo, or its ability to make a politician win election.
It said it was pure falsehood for IPOB to claim that it was responsible for the election of the Anambra governor, Chief Willie Obiano in 2013, or even ascribing to to itself the power to choose the governor of the state in the forthcoming governorship election.
The group also rated the performance of the Buhari government in the southeast very highly, saying that projects that were hitherto abandoned by previous administrations in the zone have been commenced.
“Our plan is that we in the southeast will support Buhari for his first and second administration, so as to pave way for a president of South East extraction in 2023,” it said.