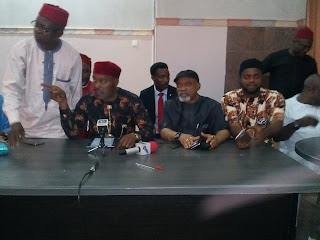 The All Progressive Congress (APC) has accused the Anambra State governor, Willie Obiano of sponsoring some members his party, All Progressive Grand Alliance (APGA) as governorship aspirants in the party to destabilize it, ahead of the forthcoming governorship election.
The party’s National Vice Chairman, South East, Hon. Emma Eneukwu stated this in a char with journalists in Anambra, saying that the party is not leaving anything to chance as it has set up a team to uncover the gang and checkmate such activities.
“I have it on good authority, that the incumbent government in the State is sponsoring some of his cronies to our party, claiming they are governorship aspirants under our party.
“Their sole aim is to create discord, distrust and disaffection within our party. We have set up a very powerful team to uncover these gang and checkmate their activities” he said.
Eneukwu warned the members of the party to be wary of dubious characters claiming to be aspirants in the party, insisting that the party has guidelines which interested members must meet before becoming an aspirant.
“I heard one announced his aspiration over the social media, and some days ago, claimed he had joined forces with the incumbent Governor. I want them to know that we understand their primary school tactics” he stated.
He described the forthcoming election in the state as a litmus test for the Igbos to prove their capability of taking their rightful place in the nation’s political space, while assuring of the party’s chances to victory in the poll.
His said, “This is one election where we must show the nation, that the Igbos are now truly and fully prepared to play the mainstream politics expected of us in the country.
“The Federal Government is our own. It is of APC, the Minister is our own and so the Governor come this 2017 election must be our own for the needed economic revolution to begin to free us economically and otherwise.
“We must utilize this golden opportunity to salvage our zone. Our people must be told of this imperative truth. The time is now.”

Enugu govt fighting us because they owe us #3bn