Facebook Twitter LinkedIn Tumblr Pinterest Reddit VKontakte Odnoklassniki Pocket
As former Central Bank Governor and governor-elect of Anambra State, Prof Chukwuma Soludo gears up for his swearing in this week, the Pentecostal Fellowship of Nigeria (PFN) has held a prayer gathering to bless his government.
The group also passed a vote of confidence on its state chairman, Bishop Moses Ezedebego, saying that his four years term has stabilized the pentecostal movement in the state, urging him to seek a second term.
The crusade which was held for three days in Awka, ended at the weekend, with prayers for the success of the incoming Soludo administration which begins on Thursday.
Ezedebego who addressed christians at the crusade said two weeks to the Anambra governorship election, held on November 6, the group came together and prayed for its success, and that God will eliminate violence in that election.
“God did it for us, and that election was free of any bloodshed. We do not know what God did for us in that election. Before the election, some people called their relatives to leave the state, but we gathered here and prayed and God heard us.
“All of you can attest that the election was the most credible and peaceful we have ever had in Nigeria. So, one week to the swearing in, we are here to bless the incoming administration.”
Presiding bishop of Grace of God Mission, Bishop Paul Nwachukwu during the sermon described Soludo as an upright man who God has given to Anambra State.
“He has come to turn around the state. There is no Anglican or Catholic in the bible, so Soludo must eschew religious politics and also carry along everyone as the leader of the state and not as leader of any group.
“What God is did in Anambra will also touch Nigeria. The time has come to do something new in Nigeria. An Igbo man is about to take over Nigeria. Nigeria will never know the best until an Igbo man becomes president. God is bringing an Igbo man. An Igbo man is a believer in Christ.
Chairmen of the group in the 21 local government areas of the state also read out a communique, supporting the state chairman, Ezedebego for his achievements in the state. 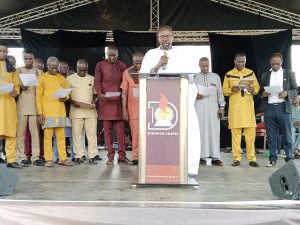 Rev Dr Stephen Ogbu, the chairman of PFN in Idemili North who read out the communique told journalists that with Soludo coming on board as governor, the group needs a proactive chairman like Ezedebego, who will liaise with Soludo and also provide spiritual backing to move the state forward.
“His tenure is coming to an end, but we are begging him to seek another four-year term to join hands with  Prof. Soludo to move Anambra State forward.” 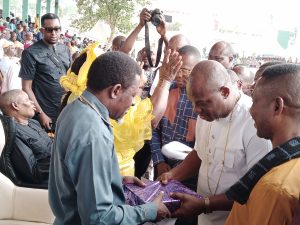