The Nigerian police force and their Nigeria security and civil defence corps have denied that the man and woman identified as police and civil defence officers who died last saturday while engaging in sex over the night are their officers.

Tragedy had struck in Anambra on Saturday when two lovers, a policeman and a female officer with the Nigerian Security and Civil Defence Corp, NSCDC were discovered dead in a room belonging to the unidentified policeman after spending a night together.

The NSCDC officer who was identified Mrs Ifeoma Okeke, also said to be a mother of five had visited the police officer, said to be her lover and spent the night in his place at Ezinifitte, Okpuno, near Awka, but never made it out alive.

The duo were discovered on Saturday by a labourer who had been contacted to to a job for the police officer on the fateful day.

A source who lives in the neighbourhood told ELEKENEWS that “the man and the woman spent the night together but did not wake up until a labourer who was to work for the deceased man came in and discovered their bodies.”

The labourer was said to have gone out and alerted some neighbours who followed him to confirm the incident before one of the relatives locked the compound preventing people from further going inside the apartment.

It was not clear what could have been the cause of the death of the duo, but some residents of the area attributed their death to fume from a small generator set used inside the apartment.

When ELEKENEWS arrived the scene sympathisers had gathered at the gate of the three storey building said to belong to the younger brother of the deceased man, whose family is said to be in Lagos.

Residents of the area who waited for a long time to see the dead bodies were however disappointed when security men comprising vigilante, police and NSCDC officers, as well as forensic experts arrived the scene, cordoning off the building, while shielding spectators before evacuating the bodies.

When ELEKENEWS called the Anambra State police command’s spokesperson, ASP, Nkiru Nwode, she denied that the deceased man was an officer with the command, and that she has not also been briefed on the identity of the deceased woman.

She promised to reach out to our correspondent once she was briefed, but as at the time of filling this report, no news of the identities of both deceased persons was made available.

Their civil defence counterpart also said that the identity of the l;ady has not been ascertained, and so can not be said to be their officers. 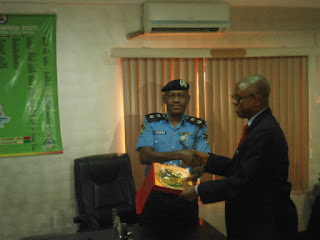