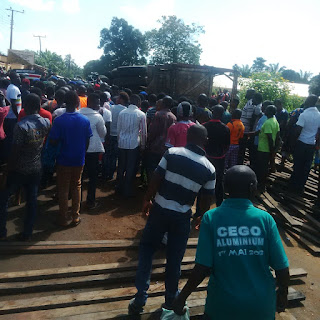 The Nigeria Secret police, also known as the SSS has started house to house visit in all the major cities of Igboland, with the sole aim of identifying young boys who are members of the IPOB, who they secretly kill too.

This alert was issued by the e indigenous people of Biafra(IPOB)after a recent meeting. They stated that the targetted towns are Onitsha, Aba, Nnewi, Umuahia, Asaba, Okigwe, Abakaliki among others.

This was stated in a press release sent to journalists and signed by the group’s spokesperson, Mr Emma Powerful.
In the release, it condemned the incessant arrest of the members of indigenous people of Biafra.
Part of the release reads, “The security agents and the Nigeria secret police the DSS have started going round the cities of Biafra land arresting those suspected to be members of the indigenous people of Biafra IPOB.
“We wondered why the federal government will be calling for negotiation and still sending the security agents to be going house to house to search for the members of IPOB and killing them secretly without traces.”
In one of the instances, IPOB said, “The DSS and other security agents went to the house of the IPOB members and arrested one Mr Chukwu Obasi Sunday who is living in Nnewi Ichi in Nnewi North LGA, this was at an odd hour.
“They arrested and shot him on his legs and now detained him with bullets wounds in DSS cell.”
They also accused the DSS for being responsible for the death of one Chidiebere Onwudiwe the national coordinator of IPOB in Biafra land and Justice O. Ude who were arrested three months ago.
“They have not been taking them to court, and nobody has seen or heard from them, we are sure they have been killed by the DSS, if they are still alive the DSS would have been taking them to court or released them on bail as they committed no crime against the government of Nigeria.”
IPOB added that, “We are crying to the entire world to come for our rescue because the Nigeria government and her security agencies programmed the strategy to be going house to house search arresting and stifling lives out of the members of the indigenous people of Biafra IPOB.
“We also use this medium to inform the whole world the torture and intimidation our members are under going in the hands of the Nigeria government and her security agents that prompted the untimely death of most of our members.