Anambra State government has ordered the reinstatement of Chief Uchenna Nwoye as the President General of Ifitedunu Town Union.

A letter signed by the commissioner for Local Government and Chieftaincy Matters, Hon Tony Collins Nwabunwanne stated that Prof. Chukwuma Soludo directed that Nwoye be reinstated as President General of the community.

The letter read: “The executive governor of Anambra State, Prof Chukwuma Soludo has after due consultation, investigation and consideration reinstated Chief Uchenna Nwoye as the President General of Ifitedunu Town Union, alongside his elected executive of 30th December 2019, to complete their term in office as stipulated by Ifitedunu Town Union constitution.”

The letter was also copied to various security agencies in the state.

Nwoye had been removed in 2021 by the former Governor Willie Obiano administration on the instigation of some people in the community.

In his reaction to the news, Nwoye wrote on Facebook and said: “The Igwe in council and the entire good people of Ifitedunu wish to thank our due process Governor, Prof CC Soludo for reinstating Hon Chief Sir Uchenna Nwoye (Isimmili) as the President General of Ifitedunu Town Union.”

Nwoye said Ifitedunu will remain supportive to the Soludo’s administration for the gesture. 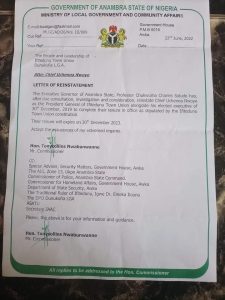