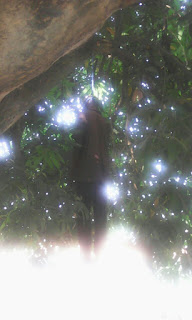 It was suspected that he may have hung himself last night.

Most passers bye who assembled to take a look at him denied his identity.

He was first discovered by a mad woman who takes refuge under the tree.

Most persons whonsppke to ELEKENEWS. Com suspected that he may have hung himself as a result of the general hardship being experienced the n the country.

His body has been removed end by security agents and deposites in an unknown morgue in the town.