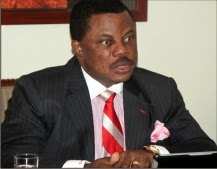 The Anambra State Governor, Willie Obiano says President Muhammadu Buhari would create an additional state in the South-East geopolitical zone if he returned as president of the country.
The governor stated this when  the leadership of  Ohaneze Ndigbo, Lagos Branch paid him a  visit at the Governor’s Lodge, Amawbia, Anambra State.
He said, “I’m in good  terms with the President. He has good plans for the South-East, contrary to the perception of some people. He has emotional feeling that the  South-East ought to have an additional state.
“I’m also hopeful that the federal government would set aside November 16 as a national day in  memory of the late Dr Nnamdi Azikiwe, the first president of this great country.”
The governor insisted that it was wrong for Ohanaeze Ndigbo to have   fixed a meeting on a day  President Buhari was in the state to commission a mausoleum in honor of the late Dr Nnamdi Azikiwe who,  the governor said  remained a world hero of of the Igbo.
Obiano urged the body to echew politics in its dealing and rather maintain neutrality, which he said was part of the objective for setting up the group as a nonpartisan organisation with the principal aim of pushing for Igbo agenda.
Speaking, the  Ohanaeze  delegation led by its branch president, Nnamdi Nwigwe said they were in the state to show solidarity to the Obiano-led government.
The group extolled  what it called Obiano’s negotiating power; think- home philosophy, among other initiatives.
He said, “We are particularly happy with your position on appreciating President Mohammadu Buhari-led administration’s good gestures to the people of the South-East region and Anambra State in particular.
“The completion of  Zik Mausoleum which is a national monument, the ongoing second Niger bridge, road projects and other infrastructures lay credence to the fact that the Buhari administration has not forgotten the region”, the Igbo group stated.