PROFILE OF ANAMBRA’S NEW GOVERNOR, CHIEF WILLIE OBIANO History was today made in Anambra State as a civilian governor for the first time hand over to another governor. Chief Willie Obiano who won Anambra governorship election which started on November 16th and continuedto November 17th with a rescheduled poll in Obosi, Idemili North LGA, while rounding off with a supplementary poll in about 210 polling units in 16 local governments of the state today(Monday) received the mantle of leadership from Chief Peter Obi. Obiano shocked members of the All Progressives Grand Alliance, APGA, Anambra people and Nigerians at large by moving from being regarded as a greenhorn in politics to winning the nomination of the party to stand for the governorship election of the state months back. Though he was described by many as an unknown quantity as far as politics in the state is concerned, but he struck a feat that is rare in politics. Besides the magic that brought him to power, one can also be wont to stop for a moment and ask the question, ‘who is Obiano’? Chief Willie Maduabuchi Obiano holds a B.Sc. Second Cla 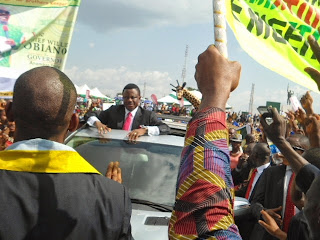 s Upper in Accounting from University of Lagos (1979) and an MBA in Marketing also from same university. Chief Willie Obiano is a Fellow of the Institute of Chartered Accountants of Nigeria (ICAN). Chief Willie Obiano was John F. Kennedy Essay Winner 1974 at CKC and holds a national Merit Certificate for outstanding service during his NYSC(National Youth Service Corps) in Benue State, Nigeria in the 1979/80 Service Year. Chief Willie Obiano is the President AMP (Advance Management Programme) of Lagos Business School for Ten years running. Chief Willie Obiano is also a 2006 BNV (Building New Ventures) CLASS member of Harvard Business School, Boston USA, also Standard University. He is the Patron, Institute of Chartered Accountants of Nigeria (Lagos Mainland District) and National Youth Council of Nigeria, Anambra East Chapter. He is also Patron of the following Catholic Groups: St. Anthony of Padua, Catholic Artistes and Entertainers Association of Nigeria, Catholic Women Organisation, Aguleri, Priests and Rev. Sisters of Aguleri Origin. Others are; Missionary of St. Paul’s Society, Catholic Women’s Organization, Our Lady Queen of Peace, Ifako, Gbagada, Catholic Laity Council of Nigeria, Onitsha Archdiocese and Grand Pillar ST Gerald Catholic Church. His community, Aguleri, conferred on Chief Willie Obiano and his wife in year 2000, separate chieftaincy titles for distinguished service. Chief Willie Obiano is currently the president of Aguleri Council of Chiefs. On January 2nd 2011, Chief Willie Obiano and his wife Chief Mrs. E V Obiano were adopted into the cabinet chief, Igwe-in council of the Idigo dynasty of the ancient kingdom of Aguleri where he hails from. This high Chief investiture made Chief Mrs. E V Obiano, the only female in the hundred and twenty years Idigo dynasty, to be so honoured. They were also conferred as The Otunba Atayese and Erelu Atayese by Oba David Adegboyega Oyewumi (Faseemi ll) Obadu of Ilemeso- Ekiti. Chief Willie Obiano started his banking career as Officer in First Bank in 1981 from where he moved to Texaco Nigeria Plc as Accountant. Chief Willie Obiano was promoted 4 times in his eight-and-half-year-service at Texaco to become Chief Internal Auditor. Chief Willie Obiano is a specialist in Bunkering, Lube-blending and Refinery Audits. Chief Willie Obiano was part of the team that audited Texaco Refinery in Rotterdam, Netherlands in 1989. He joined Fidelity Bank from Texaco in 1991 as Deputy Manager and head of Audit. He was promoted Manager in 1991, Assistant General Manager in 1993, Deputy General Manager in 2000 and General Manager in 2002 and Executive Director in October, 2003. Between 1991 and 2002, Chief Willie Obiano headed the following Groups, Divisions, at one point or another: Inspection and Audit; Operations and Information Technology; Division Head, Commercial & Consumer Banking; Division Head, Eastern Market. Other areas include Financial Control, Risk Management and Transaction Support, Corporate Finance, and Non Bank Financial Institutions. Obiano was part of the great team that saw Fidelity Bank through the Bank’s Consolidation process. He is a no nonsense tactician that you cannot miss in a crowd. As Executive Director of the Mega Fidelity Bank (and No. 2 man), Chief Willie Obiano is in charge of Business Banking (Corporate Banking, Non Bank Financial Institutions, Treasury, (Naira and Foreign Exchange, Oil & Gas, Telecom & Food and Beverages, Transport and Aviation). All the Regional Managers of the bank report through him to the MD/CEO. Chief Willie Obiano has attende 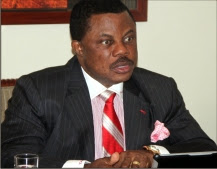 d numerous banking courses including the following: Credit & Trade Services Course – Citi Bank, New York (1994) Treasury and Money Market – NatWest, London (1996) Correspondent/Trade Services/ Emerging Market Course – FIM Bank, Malta (2002) Managing Integration Process – Houston Texas 2006. Even though he is said to be a little old fashioned, his trademark hair style stands him out in a crowd. He is married with a beautiful daughter and a young son. His Aguleri people and the entire Anambra North are still celebrating their luck for being able to produce the next governor.