Facebook Twitter LinkedIn Tumblr Pinterest Reddit VKontakte Odnoklassniki Pocket
Monarchs of all the 45 communities in the Old Aguata Union, OAU, which consists of four local government areas have thrown their weight behind the Anambra state Governor, Chief Willie Obiano for a second term in office. 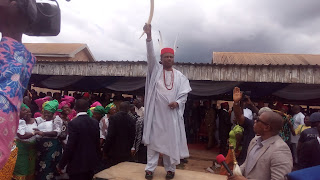 Anambra will likely hold an election for a new governor later 2017, and the incumbent governor has shown visible signs of wanting to give the seat a second shot.
Chief Titus Anigbogu, the convener of the endorsement rally which was held yesterday at Ekwulobia township said the move was engineered by the harmony that has existed in Anambra state in the sharing of political offices.
While reading the endorsement text, which was approved by the 45 monarchs Anigbogu said, “Whereas Anambra south did two tenures by Dr Ezeife and Dr Mbadinuju, and the central has done two tenures by Dr Ngige and Mr Peter Obi, it will only be fair and equitable to allow Anambra North, represented by by the incumbent governor to go for a second term.
“This will give the people of the area a sense of belonging. This is even so as the governor has done well in the areas of security and the payment of salaries, ” Anigbogu said.
Former governor of Anambra state, Dr Chukwuemeka Ezeife who was the chairman of the ocassion praised the people of Old Aguata Union for thinking it wise to come together and show support to the governor who is doing a wonderful work in the state.
Ezeife said Anambra is a flagship state in the south east, and that Governor Obiano should not relent in organising steady meetings for governors of the region so as to present a front for the tackling of common problems.
Obiano is his remarks praised the people of the area and their monarchs for the endorsement, saying he will continue to work for the development of the area.
Highlight of the event was the presentation of a staff of recognition and  chieftaincy title to the governor by the 45 traditional rulers representing  communities in Old Aguata Union. The governor was honoured with a chieftaincy title of Agunechemba; the lion that cards the town.

Emeka Offor's Family React To Allegation of His Being Broke, Says It Campaign of Calumny