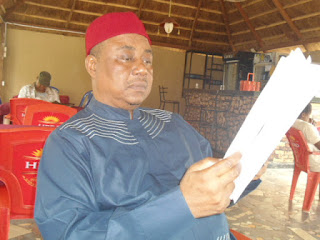 As the Election petition tribunal sitting in Awka continues to read out its judgment for the National Assembly Election petitions brought before it by aggrieved candidates and parties, the candidate of the All Progressives Grand Alliance, APGA in the last general election, Chief Godson Ezenagu has accused his opponent, Hon Anayo Nebe of Peoples Democratic Party, PDP of outright theft of mandate.
The tribunal had last Friday dismissed Ezenagu’s petition against Hon Nebe, saying that Nebe won the election, after 600 votes illegally awarded to him in Ayom na Okpara square one was subtracted, leaving him in 32 votes lead ahead of Ezenagu.
Briefing journalists on Tuesday, Ezenagu said that the judiciary in Nigeria is a big complication and leaves a panel with lots of lee way to thwart judgment if they so wish to. He also stated that the judgment of the court last Friday was not thorough and has a lot of ambiguities that leaves the judgment in question.
“In page 36 of the judgment, which stated that in Ayom na Okpara square, where Nebe scored 129, his agents falsified it to 729, there by awarding him illegal 600 votes, and all the tribunal did was to subtract the 600 votes, which still leave him in lead of 32 votes ahead of me.
“I expect that they would have also visited the results of other booths, because if they could falsify a booth with 600 votes, it is expected that they would have also inflated votes in other units. Secondly, a man who has been caught in the act of stealing votes should be penalized.”
Also, Ezenagu wondered why the judges in page 37 of the judgment resolved and said that the matter has been partially resolved in favour of the first respondent, Nebe, and he sought to know what the judges meant by the word – partially.
He insisted that the judgment was compromised, just as it was not thorough, and that he will explore other avenues to get back the mandate given to him by the people as the judges merely ruled based on technicalities, which was no longer in vogue.
“I am ready to follow this matter to any level. The judges cannot tell us that we have caught a thief and his loot and handed to them and they set him free to go and enjoy his loot.
“I am calling on my supporters to keep calm because they have done their best by voting for us, and we will ensure that we retrieve the mandate and use it to deliver to them all the democracy dividends we promised them.”